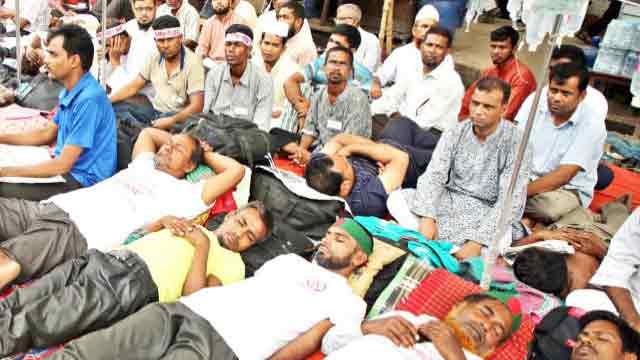 Dhaka, July 11 (Just News): At least 250 teachers and employees of non-governmental schools and madrasas fell sick on Tuesday, the 16th day of their ‘fast unto death’ to press the demand of providing the government’s monthly payment order, MPO, benefits.

Under the MPO programme the government pays salaries and other benefits of teachers and employees of non- government insitutions.

The fasting teachers handed a proposal to the Prime Minister’s Office that if there was funding shortage they would take half the monthly salary over a year if their institutions were provided the MPO benefits.

Later, Shofiqul Islam senior vice president of the Non-MPO Educational Institutions’ Teachers and Employees Federation told New Age that they requested the government to provide MPO benefits to all the non-government schools madrasas.
‘If there is fund shortage, we will take half the monthly pay for one year if government extends the MPO benefits, we said in our proposal, he said.

He said, ‘We gave the same proposal to the education ministry on July 8.’

Federation general secretary Binoy Bhusan Roy said that more than 250 teachers fell sick during 16 days of their fast under the open sky until Tuesday.

On June 10, the teachers aggrieved over finance minister AMA Muhith keeping mum about the MPO issue in his budget speech, resumed their demonstrations.

Muhith omitting the issue in his budget presentation shocked the teachers as prime minister Sheikh Hasina assured them in January that their institutions would get the MPO benefits from the next fiscal.

In 2010, the government provided MPO benefits to 1,624 institutions.