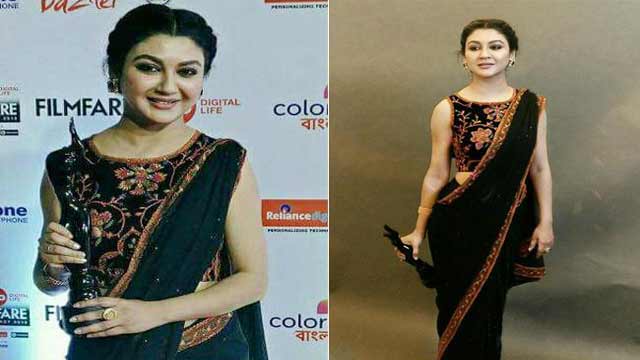 Dhaka, Feb 18 (Just News): The ascendancy and supremacy of Jaya Ahsan in film industry continues for her strong and skilful acting beyond boundary and home.

Jaya Ahsan won the third edition of Jio Filmfare Awards (East) 2018 in the best actress category for the first time for IndoBangla joint venture movie ‘Bishorjan’ after two times nomination for the award.

‘Bishorjan’ was selected as the best film while its director Kaushik Ganguly won the Best Director award.

‘Cinemawala’ director Kaushik Ganguly got the award for the best director and also the best original story last year.

The Jio Filmfare Awards (East) 2018 which celebrates the best of Bengali cinema in India handed over the award to Jaya Ahsan on Saturday (February 17) at a ceremony.

Jaya Ahsan shared her feeling on her Facebook page, ‘It’s all of your continuing love and recognition for my works that keeps on encouraging me to do more. Truly overwhelmed and humbled for being chosen the best actress for Bishorjan at Jio Filmfare Awards, East 2018.’

Alongside, Chirkut, a Bangladeshi musical band, got nominations for the best lyrics, best music director and best playback female singer categories in the Jio Filmfare Awards (East) in India.

Sharmin Sultana Sumi from Chirkut was nominated best female singer for the song ‘Ahare Jibon’ (Doob) while the song was nominated for the best lyrics category as well.

Tollywood superstar Prosenjit Chatterjee got the best actor in leading role (male) award for ‘Mayurakshi’, while ‘Bishorjan’ was adjudged the best film at the Jio Filmfare Awards (East) 2018.

The first segment of the awards was held for Bengali, Assamese and Odia films on March 29, 2014, while the award ceremony was discontinued for 2015 and 2016, then again continued from 2017.