Seminar at the British Parliament 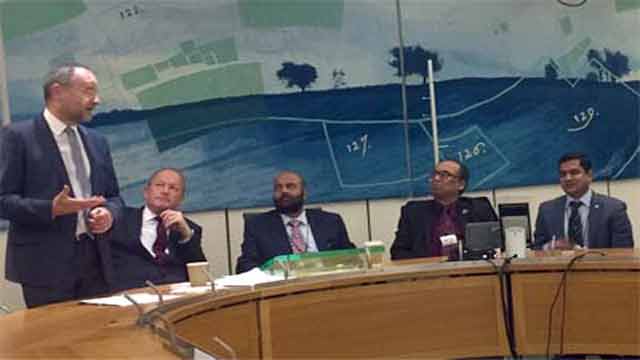 London, Dec 8 (Just News): The British Member of the Parliament, Mr Simon Danczuk has said that the 5th January 2014 was the day democracy died in Bangladesh. It was flawed and manipulated election with the main opposition forced to boycott the elections and polling stations attacked by the authorities on the day. The consequences of that day are still being felt today.

He said this on Tuesday evening at a seminar titling ‘Democracy and Human Rights' in Bangladesh’ at the House of Commons committee room.

About freedom of press Mr Danczuk said that, Back in October this year, Freedom House has published their annual report which once again highlighted the appalling state of freedom in Bangladesh. In particular, the deterioration of freedom of expression and belief, something critical for a healthy democracy to function. This downward trend is should be setting of alarm bells. ‘Reporter Without Border’ rates Bangladesh at 144 out of 180 countries on its world press freedom index.

He said, while the picture seems very bleak- democrats in the UK and Bangladesh must stand together. I will continue to call for free, fair and participatory elections in Bangladesh, and encourage my fellow parliamentarians to stand shoulder to shoulder with civil society activists, bloggers and journalists who are trying to hold the Bangladeshi government to account.

Took part in the seminar Lord Ahmed said, democracy, human rights and the rule of law under serious threat in Bangladesh. There is no security for the mass people. He stressed for a rapid change.

Paul Blomfield MP said , Bangladesh is now facing of two important challenges. One is democracy and another is Climate change. To solve this problem all political parties should work together.

He said, economy index of the Bangladesh is rising over the last decade.

Dr. KM Malik said, through the last election an authoritarian rule has emerged in Bangladesh. The government has established a one party rule by conducting disappearances, extra judicial killing and suppression of media freedom.

Mushfiqul Fazal said , the current unelected government of Bangladesh is committing a series of various misdeeds to prolong its power. The ruling authority has grabbed people's democratic and fundamental rights.

This UNCA member said, according to the statistics of ‘Ain O Shalish Kendra ( ASK)’, a human rights organization, from January to October of this year, 152 opponent political   has been killed and 82 persons have been disappeared by the law-enforce agency. Among this eight bodies were recovered from different areas of the country.

He said,Tulip Siddiqui, British MP, wants to ban the United States newly elected President Donald Trump in the UK. Because she fears that Trump’s may occurs violence. But her aunt, Prime Minister Sheikh Hasina killing innocent people just to keep the power in Bangladesh. She is controlling of judiciary the rules of law and violating human rights. Tulip is supporting her aunt all along.

Mushfiqul Fazal said, not Mr Trump but Hasina should be banned from entering in the UK.

Citizen Movement convener MA Malik  thanked to Simon Danczuk MP and others MP and lords  for participating the seminar  and said, the UK should stand beside Bangladesh in this crucial moment. We hope UK will take all necessary steps to restore democracy  and peoples rights in Bangladesh.