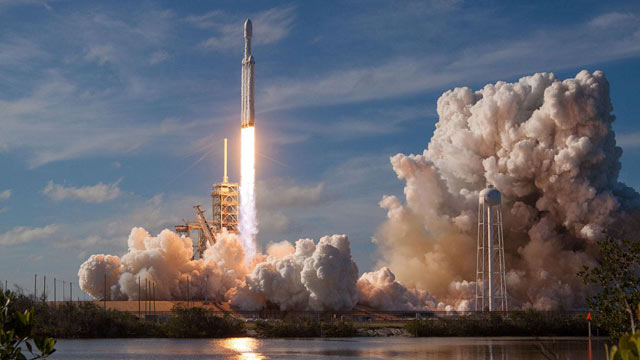 The 23-story-tall jumbo rocket, carrying a cherry red Tesla Roadster from the assembly line of Musk’s electric car company as a mock payload, thundered off its launchpad in billowing clouds of steam and rocket exhaust at 3:45pm (2045 GMT) from the Kennedy Space Center in Cape Canaveral.

Boisterous cheering could be heard from SpaceX workers at the company’s headquarters in Hawthorne, California, where a livestream feed of the event originated. At least 2,000 spectators cheered the blastoff from a campground near Cocoa Beach, 5 miles (8 km) from the space center.

Within three minutes, the Falcon Heavy’s two side boosters separated from the central rocket in one of the most critical points of the flight.

Then, capitalizing on cost-cutting reusable rocket technology pioneered by SpaceX, the two boosters flew themselves back to Earth for safe simultaneous touchdowns on twin landing pads at Cape Canaveral Air Force Station, about eight minutes after launch. Each rocket unleashed a double sonic boom as it neared the landing zone.

The center booster rocket, which SpaceX had predicted was less likely to be salvaged, slammed into the Atlantic at about 300 miles per hour (483 kph), destroying two of its thrusters and showering the deck of the nearby drone landing vessel, Musk told a post-launch news conference.