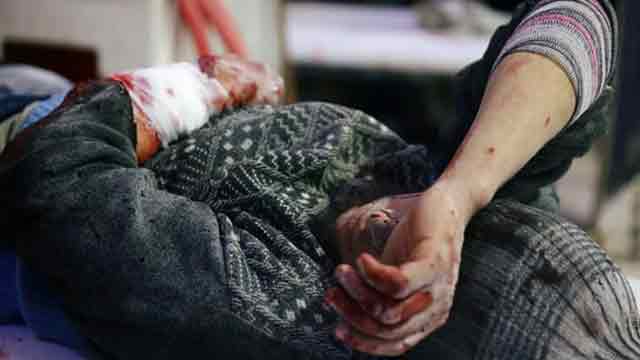 It was the highest two-day death toll since a 2013 chemical attack on the besieged enclave, which killed hundreds, the Syrian Observatory for Human Rights said.

The UK-based war monitor said 106 people had been killed by bombardment on Tuesday.

Six hospitals have been struck over two days in the Syrian rebel enclave, putting three out of service and killing several people, the United Nations said.

"I am appalled and distressed by reports of the horrifying attacks against six hospitals in East Ghouta over the past 48 hours," said Panos Moumtzis, the UN's regional humanitarian coordinator for the Syria crisis.

In addition to the six listed by the UN, another key hospital was hit and put out of service Tuesday, the Syrian American Medical Society said.
Syrian National Coalition: Ghouta being 'exterminated'

"From yesterday until this very moment, we've witnessed all kinds of shelling in our neighbourhood," Shams, a mother of two children, told Al Jazeera from Eastern Ghouta.

"Warplanes have not stopped soaring over the city. When the shelling temporarily stops, they start firing missiles at us," she said.

Relentless air raids and artillery fired by Syrian government forces have left the residents of the Damascus suburb in a state of panic.

Khalid Abulabed, a field doctor in the Damascus suburb, under siege since 2013, described the current situation as "crazy and catastrophic".

"It's indescribable. It reminded me of what we used to see in Aleppo - shelling day and night," Abulabed told Al Jazeera.

"Nothing is excluded from the shelling, not schools, not residential areas, not even markets, which has caused a significant increase in the number of people martyred and wounded."

Hundreds of people have been wounded in the onslaught.
'No signs of life'

Residents say there are no signs of life in the area - home to nearly 400,000 people - especially with the lack of basic necessities, including food and medicine.

"We reached a point where we don't even leave the house during these raids so that if we're attacked, we die together," said Shams.

The attack that began on Sunday reportedly marks an upcoming ground assault, which will soon be launched by the government, the Syrian Observatory said.
Civilian death toll rising in Syria's eastern Ghouta

Eastern Ghouta is the last, remaining rebel-held area east of Damascus, and has been under siege by Syrian President Bashar al-Assad's forces since 2013.

The UN and other rights organisations have continuously called for a permanent ceasefire and for the government to lift the "crippling" blockade.

As a result of the tight siege, aid convoys have not been able to deliver much of the desperately needed food and medical supplies, and overall access to the enclave remains "woefully inadequate".

On February 14, a convoy's deliveries reached only 2.6 percent of the estimated 272,500 people in need of humanitarian aid, according to Ali al-Za'tari, the UN's humanitarian coordinator in Syria.

The lack of commodities has left residents with two main - and scarce – options to stay afloat, including rice and bread.

Facing severe food shortages, coupled with the sharp rise in food prices, mothers such as Shams fear dying of starvation.

"Nothing else is available because of the siege. You can't even find any shopkeepers to sell you anything in the midst of these attacks - we're starving," she said.

"If we don't die from the shelling, we will of starvation."

The siege has also forced doctors such as Abulabed to perform medical procedures on those wounded using "very basic" equipment.

"We don't even have access to adequate medical equipment," said Abulabed.

On Tuesday, UNICEF issued a blank statement to express "outrage" over the children who lost their lives to the latest wave of attacks.

"Do those inflicting the suffering still have words to justify their barbaric acts?" said Geert Cappelaere, UNICEF's regional director.