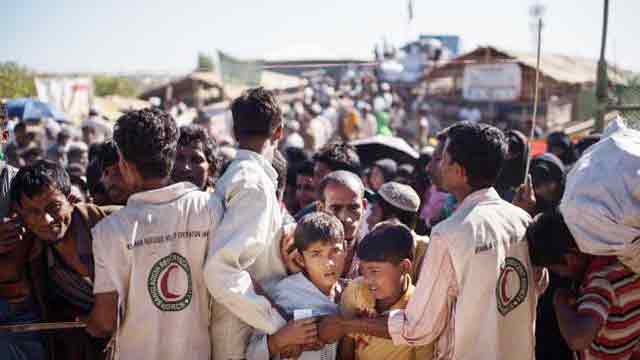 New York, Dec 6 (Just News): The Human Rights Council, in a resolution, has condemned the alleged systematic and gross violations of human rights and abuses committed against persons belonging to the Rohingya Muslim community and other minorities in Myanmar.

The resolution on the human rights situation of the minority Rohingya Muslim community and other minorities in the Rakhine state of Myanmar was adopted in Geneva on Tuesday by a vote of 33 in favour, three against and nine abstentions.

The Council strongly condemned the alleged systematic and gross violations of human rights and abuses committed in Myanmar, in particular in Rakhine state, notably against persons belonging to the Rohingya Muslim community and other minorities, including women and children.

It condemned the attacks against Myanmar police and military posts carried out on 25 August 2017 and all acts of violence against the security forces, and stressed that the challenges facing Rakhine state and other areas in Myanmar could be resolved only through peaceful means.

Saudi Arabia and Bangladesh took the floor to introduce the text of the resolution, according to UN office.

After the adoption of the resolution, Bangladesh spoke on behalf of the Core Group of sponsors, and the United States, Egypt and Indonesia took the floor in an explanation of the vote after the vote.

Shahriar Alam noted that the overwhelming support for the call to convene the special session demonstrated the international community’s grave concern about the human rights situation of the Rohingya Muslim population and of other minorities in the Rakhine state of Myanmar.

Crimes committed against Rohingya included summary execution of adults and children, indiscriminate rape of women and girls, torture and detention, aerial firing on the fleeing population, and burning of houses and property.

The State Minister said there was no or very limited access of the United Nations and humanitarian actors to northern Rakhine state.

Bangladesh had tried to resolve the matter bilaterally for decades, without any reciprocity since 2005.

He said the recent conclusion of a bilateral arrangement of return was but one component of a comprehensive long-term solution.

Bangladesh bore the burden of nearly one million Myanmar nationals, out of which 626,000 had entered Bangladesh in the past three months.

Only sustained international pressure on Myanmar could ensure the fulfillment of its various commitments, he said.

It called for those allegations to be investigated for those found responsible to be held to account, and for access by victims of human rights violations, including victims of rape and other forms of sexual violence, killings and other attacks, to long-term health services and psychosocial support to be ensured.

The Council requested the High Commissioner for Human Rights to track progress concerning the human rights situation of Rohingya people, and to provide oral updates, followed by an interactive dialogue, at the thirty-eighth, forty-first and forty-fourth sessions of the Human Rights Council, with a view to reaching a comprehensive solution of the crisis within three years through the full implementation of the present resolution and Council resolution 34/22.

The Council also requested the High Commissioner to prepare a comprehensive written report on the situation, including on the level of cooperation and access given to the Fact-Finding Mission and other United Nations human rights mechanisms, the implementation of the present resolution, the findings and recommendations of the United Nations system on the situation of human rights of Rohingya people in Rakhine state and recommendations on a future course of action, to present the report to the Human Rights Council at its fortieth session, and to submit the report to the General Assembly for its consideration.

The opening meeting of the special session heard keynote statements by Zeid Ra’ad Al Hussein, United Nations High Commissioner for Human Rights; Catalina Aguilar Devandas, Chairperson of the Coordinating Committee of the Special Procedures, who also spoke on behalf of Yanghee Lee, Special Rapporteur on the human rights situation in Myanmar; Marzuki Darusman, Chair of the Fact-Finding Mission on Myanmar, in a video statement; and Pramila Patten, Special Representative of the Secretary-General on sexual violence in conflict; as well as statements by Myanmar and Bangladesh as the concerned countries.

Before the Council adopted the resolution, it continued its general debate, in which speakers stressed that peace, stability, harmony and reconciliation among all the communities in Rakhine state must be urgently achieved.

They noted that there were no easy solutions for this difficult and complex situation with roots dating back more than half a century.

Many stated their support for the agreement between Bangladesh and Myanmar on the return of the Rohingya to their places of origin in Rakhine state.

They stressed the duty of the Government of Myanmar to provide them with all necessary security guarantees, and its responsibility to ensure that all returns were voluntary, safe, sustainable and dignified.

Others expressed concern about this agreement which sought to hasten the return of Rohingya to an unsafe environment in which the commission of further atrocities remained highly likely.

Before any safe, voluntary and dignified return of refugees could take place, all abuses against Rohingya must cease and all perpetrators of atrocities committed since October 2016 must be held accountable, they stressed.