US still ‘locked and loaded’ for new chemical attacks 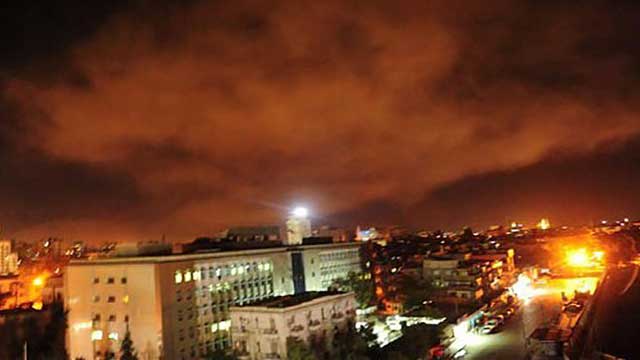 Washington, Apr 15 (Just News): President Donald Trump has warned Syria's government the US is "locked and loaded" to strike again if it carries out new chemical attacks.

The warning came after the US, UK and France struck three Syrian sites in response to a suspected deadly chemical attack in the town of Douma a week ago.

Syria denies any chemical use and says that attack was fabricated by rebels.

The wave of strikes represents the most significant attack against President Bashar al-Assad's government by Western powers in seven years of Syria's civil war.

What has been the reaction to the strikes?

There was a bitter exchange at a UN Security Council emergency meeting on Saturday as Russia sought to secure a condemnation of the early morning air strikes by Western powers.

Russia's UN envoy, Vassily Nebenzia, read out a quote from President Vladimir Putin accusing the allies of "cynical disdain" in acting without waiting for the results of a chemical watchdog investigation into the Douma incident.

Inspectors from the Organisation for the Prohibition of Chemical Weapons (OPCW) are currently in Damascus and are expected to visit Douma this weekend.

Mr Nebenzia accused the US, UK and France of "hooliganism" and of "demonstrating a blatant disregard for international law".

US envoy Nikki Haley said the strikes were "justified, legitimate and proportionate".

She said: "I spoke to the president this morning and he said, 'if the Syrian regime uses this poisonous gas again, the United States is locked and loaded'."

Ms Haley said the US and its allies had given diplomacy "chance after chance" but Russia had continued to veto UN resolutions.

She said: "We cannot stand by and let Russia trash every international norm and allow use of chemical weapons to go unanswered."

Bashar Jaafari, Syria's envoy to the UN, said the US, UK and France were "liars, spoilers and hypocrites" who exploited the UN "to pursue your policy of interference and colonialism".

On the 15-member council only China and Bolivia voted in favour of Russia's resolution.