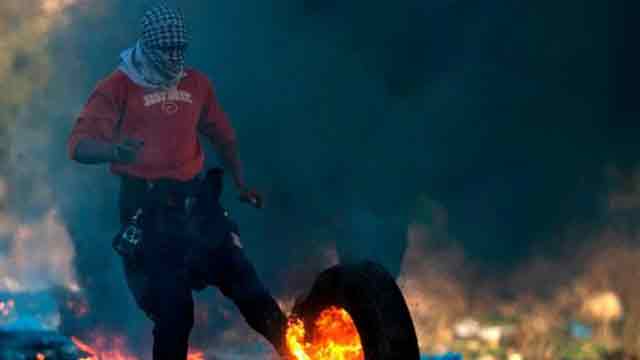 The move ended US neutrality on one of the region's most sensitive issues.

Arab League foreign ministers now say it means the US cannot be relied upon as a broker of Middle East peace.

The statement by 22 countries, including close US allies, comes after a third day of violence and protests in the West Bank and Gaza Strip.

Israel has always regarded Jerusalem as its capital, while the Palestinians claim East Jerusalem - occupied by Israel in the 1967 war - as the capital of a future Palestinian state.

For Mr Trump the decision fulfils a campaign promise and he has said it was "nothing more or less than a recognition of reality".

But he has faced fierce criticism for the decision.

The Arab League resolution was agreed at 03:00 (01:00 GMT) after hours of talks in Cairo. It was backed by a number of US allies, including the United Arab Emirates, Saudi Arabia and Jordan, who had already voiced their concern.

At an emergency meeting of the UN Security Council on Friday, the US found itself isolated, with the other 14 members all condemning Mr Trump's declaration.

But US ambassador Nikki Haley accused the UN of bias, saying it "has outrageously been one of the world's foremost centres of hostility towards Israel", and that the US was still committed to finding peace.
Media captionAnalysis: Breaking down what Mr Trump said and what it means for peace

On Saturday, Israel's Prime Minister Benjamin Netanyahu said he had heard "voices of condemnation over President Trump's historic announcement" but had "not heard any condemnation for the rocket firing against Israel that has come and the awful incitement against us".

He will be in Paris on Sunday for talks with President Emmanuel Macron, ahead of meetings with EU foreign ministers on Monday.

Three rockets were fired towards Israel from Gaza on Friday, leading Israel to carry out air strikes in response. It said it hit military sites belonging to the Islamist group Hamas, killing two of its members.

Hundreds protested in the West Bank and Gaza on Saturday, but crowds were smaller than in previous days.

In northern Israel a bus was pelted with rocks as it passed through mostly Arab communities, with three Israelis injured, Haaretz reported.

Thousands of Palestinians had protested on Friday, with solidarity demonstrations held across the Arab world and in other Muslim-majority nations.

Israeli Defence Minister Avigdor Lieberman said on Sunday: "Our hope is that everything is calming down and that we are returning to a path of normal life."

Jerusalem is of huge importance to both Israel and the Palestinians. It contains sites sacred to the three major monotheistic faiths - Judaism, Islam and Christianity.

Israel occupied the eastern sector - previously occupied by Jordan - in 1967, and annexed it in 1980, but the move has never been recognised internationally.

Some 330,000 Palestinians live in East Jerusalem, along with about 200,000 Israeli Jews in a dozen settlements there. The settlements are considered illegal under international law, though Israel does not regard them as settlements but legitimate neighbourhoods.

According to the 1993 Israel-Palestinian peace accords, the final status of Jerusalem is meant to be discussed in the latter stages of peace talks.

The last round of talks between Israel and the Palestinians broke down in 2014 and while the US is formulating fresh proposals, Palestinian officials have said Mr Trump's announcement has disqualified the US from brokering future negotiations.