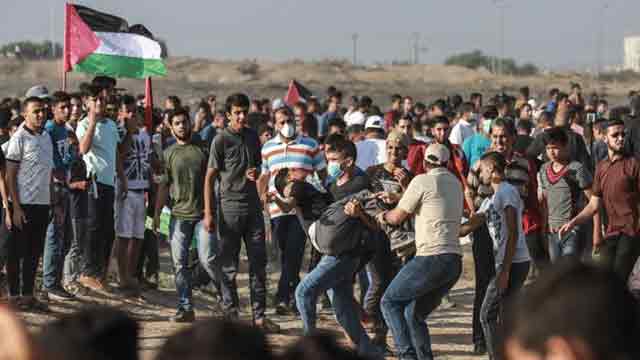 Gaza, July 14 (Just News): Protests began on March 30 calling for the right of return of refugees, which make up 70 percent of Gaza's population.

Israeli forces have shot dead a 15-year-old Palestinian during protests near the fence with Israel in the Gaza Strip, as demonstrations marked on Friday more than 100 days since the start of the Great March of Return mass rallies.

At least 68 others were wounded by the Israeli army, which fired live ammunition and tear gas canisters towards the protesters.

The teenager's killing brings the number of Palestinians killed by Israeli forces since the protests began on March 30 to 138. More than 160,000 others were wounded.

Protesters taking part in the weeks-long Great March of Return rallies have been calling for the right of refugees and their descendants to return to the homes and lands from which they were violently expelled from in 1948.

In advance of Friday's protest, the organising committee called on residents to take part in the demonstration in a show of solidarity with Khan al-Ahmar, a Bedouin village in the occupied West Bank slated for total demolition by Israeli authorities.

"From the unity of blood and unity of purpose, we declare Friday the day of solidarity with our people in the Khan al-Ahmar," the committee said in a statement.

The Israeli Supreme Court has temporarily suspended the demolition of the Bedouin village, home to at least 180 people, until July 16.

Earlier this month, Israeli forces assaulted dozens of Palestinians in Khan al-Ahmar, after arriving with heavy equipment and at least one bulldozer.

The village lies in Area C, which is under total Israeli civil and security control. The Israeli court sanctioned the demolition of the village because it was built without the necessary construction permit, yet Israeli authorities rarely grant building permits.

At the same time, the construction of Jewish-only settlements, regarded as illegal under international law, continues at an unfettered pace.
Gaza protests

The protests in Gaza, which began on the anniversary of the 1976 Land Day, have witnessed participants from all walks of life and a number of activities such as football matches, prayers and the traditional dabke dance.

Five encampments were set up near the Israeli fence east of the coastal enclave along the length of the Strip, with the protests calling for the right of return for Palestinian refugees.

In previous demonstrations, protesters burned hundreds of tyres, creating a smokescreen to protect them from sniper fire, they said.

In recent weeks, incendiary kites have been flown over the fence, setting fire to Israeli-owned farmlands causing hundreds of thousands of dollars worth in damage.-Aljazeera