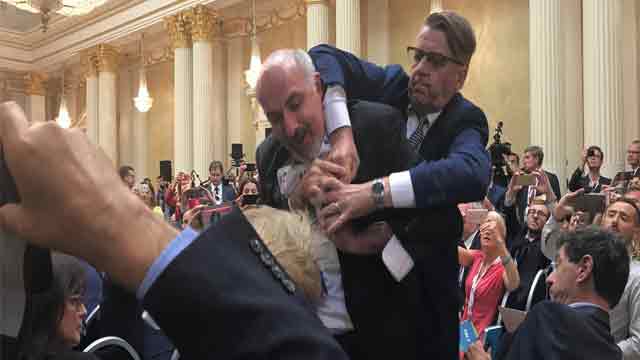 Helsinki, July 16 (Just News): An Op-Ed writer for the publication The Nation was forcibly removed from a press briefing between U.S. President Donald Trump and Russian leader Vladimir Putin on Monday, before the two leaders were set to take questions from the press.

The man removed was Sam Husseini, said Vice President of Communications at The Nation Caitlin Graf. Husseini is the communications director of the Institute for Public Accuracy, a Washington D.C.-based nonprofit that promotes progressive experts as alternative sources for media reporters.

Husseini was holding a sign that Russian authorities reportedly called a "malicious item." He had a sign that said "Nuclear Weapon Ban Treaty."