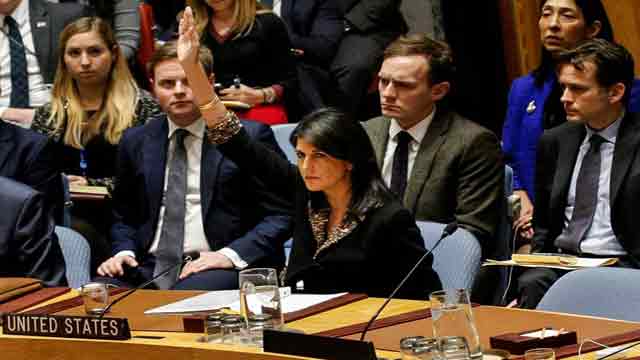 New York, Dec 19 (Just News): The US has vetoed, as expected, a UN Security Council draft resolution rejecting President Donald Trump's recent recognition of Jerusalem as Israel's capital, and his plans to move the American embassy in Israel to the city.

However, the proposed measure was backed on Monday by the 14 other Security Council members, including many US allies, highlighting Washington's increasing isolation over an issue that has triggered mass rallies in support of the Palestinians in major international cities.

"What is troublesome to some people […] is that the United States had the courage and honesty to recognise a fundamental reality," Nikki Haley, the US ambassador to the UN, said.

"Jerusalem has been the political, cultural, and spiritual homeland of the Jewish people for thousands of years - they have had no other capital city," she continued.

"The United States has the sovereignty to determine where and whether we establish an embassy," said Haley, describing the vote as an "insult" that "won't be forgotten".

Along with the UK, France, Russia, and China, the US is a permanent member of the UN Security Council, with the power to block any resolution from passing with the use of a veto.

Riyad Mansour, the Palestinian ambassador to the UN, said: "It is paradoxical that while we were waiting for a peace plan from the US, the administration instead decided to further obstruct peace and delay its realisation.

"The US decision encourages Israel to persist in its crimes against the Palestinian people and to continue its occupation of our territory. No rhetoric will hide this complacency in prolonging the occupation," he added.
Draft resolution

The Egyptian-drafted text reiterated the UN position on Jerusalem, affirming "that any decisions and actions which purport to have altered, the character, status or demographic composition of the Holy City of Jerusalem have no legal effect, are null and void and must be rescinded in compliance with relevant resolutions of the Security Council".

In an effort to keep Washington from exercising its veto power, the text did not mention the US by name, saying instead it "deeply regrets recent decisions regarding the status of Jerusalem".

Francois Delattre, France's ambassador to the UN, said his country regretted the US decision over Jerusalem.

"This draft resolution confirms an international consensus on Jerusalem that has been built over decades," said Delattre.

The vote came less than two weeks after Trump's controversial speech, which reversed decades of US policy on the Israeli-Palestinian conflict.
The US and the international community have long maintained that the solution to the Middle East conflict would be the formation of a Palestinian state - alongside the Israeli one - with East Jerusalem as its capital.

Trump's declaration unleashed widespread anger and rallies within Palestine and in major cities across the world.

Since the decision, at least nine Palestinians have been killed and more than 1,900 injured in protests in the occupied territories of the West Bank, East Jerusalem and the Gaza Strip.
General Assembly

Anticipating the US veto, the Palestinian leadership in the West Bank promised to take the issue to the UN General Assembly to seek the passing of a resolution there.

Riyad al-Maliki, foreign minister of the Palestinian Authority (PA), said in a statement on Monday: "The member states of the General Assembly will be asked to vote on the same draft resolution that we presented to the Security Council, which the US has blocked with the veto.

"In the General Assembly, the US will not be able to use this privilege," he added.

Since the 1970s, when it first began exercising its veto power, the US has shot down some 42 Security Council resolutions relating to Israel and its actions in the occupied Palestinian territories.

Turkey, a long-time ally of Palestine, is also leading efforts to pass a resolution through the UN's General Assembly.

A vote in favour of the resolution in the 193-member UN General Assembly, however, is not legally binding. This means it would only serve as a recommendation and would act as an expression of the international community's stance on Jerusalem.

Al Jazeera's Mike Hanna, reporting from the UN headquarters in New York, said although the vote would not be binding, it would "highlight what the Palestinians insist is the increasing isolation of the US on the status and issue of Jerusalem".
PLO meeting

Also on Monday, the Palestine Liberation Organization (PLO), an umbrella of Palestinian political parties, announced it would no longer accept the US as a partner in the peace process.

"We will not allow the US to be a mediator or a partner in the peace process," said Mahmoud Abbas, the president of the PA, which is the Ramallah-based semi-governmental body that administers parts of the occupied West Bank.

Abbas also promised to seek full membership for Palestine at the UN, despite a previous push failed to do so in 2011.

Currently, Palestine is a "non-member observer state", meaning that it has the right to speak but not vote on resolutions.

"We will take political, diplomatic, and legal actions against Trump's declaration regarding Jerusalem," said Abbas.