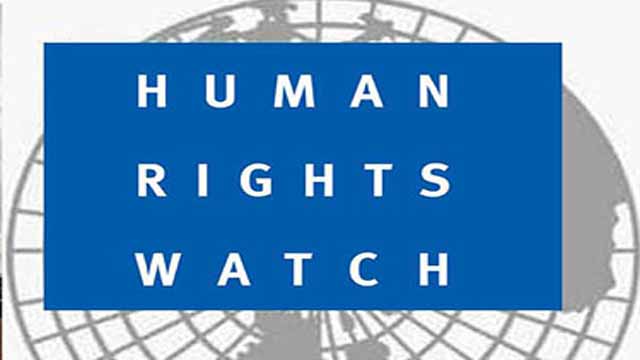 The massacre was part of the military’s campaign of ethnic cleansing that has forced more than 645,000 Rohingya to flee to neighboring Bangladesh since late August.

The 30-page report, “Massacre by the River: Burmese Army Crimes against Humanity in Tula Toli,” details the security force attack on several thousand villagers in Tula Toli, known officially as Min Gyi. Human Rights Watch documents how security forces trapped Rohingya villagers along a riverbank and proceeded to kill and rape men, women, and children, and torch the village.

“The Burmese army’s atrocities at Tula Toli were not just brutal, they were systematic,” said Brad Adams, Asia director. “Soldiers carried out killings and rapes of hundreds of Rohingya with a cruel efficiency that could only come with advance planning.”

The report draws on interviews in Bangladesh with 18 Rohingya survivors from Tula Toli, as well as Human Rights Watch’s broader investigation into the Burmese military’s operations against Rohingya villages, including interviews with more than 200 Rohingya refugees since September.

Military operations were launched following August 25 attacks by the Arakan Rohingya Salvation Army (ARSA) on security force outposts. On the morning of August 30, hundreds of uniformed Burmese soldiers and armed ethnic Rakhine villagers arrived in Tula Toli. Rohingya villagers, including residents of neighboring areas who had escaped to Tula Toli following attacks on their towns in previous days, fled to the wide bank of the river that borders the village on three sides. Many villagers told Human Rights Watch that the ethnic Rakhine local chairman had told them to gather at the beach, where he said they would be safe.

Security forces then surrounded the area, shooting at the gathered crowd and those attempting to flee. They separated men and women, holding the women and children under guard in shallow water while systematically shooting the men or hacking them to death with knives. Shawfika, 24, who saw her husband and father-in-law killed, said the killings on the beach went on for hours:

They just kept catching men, making them kneel down and killing them. Then they put their bodies on a pile. First they shot them, and if they were still alive they were killed with machetes.… It took them one-and-a-half hours to carry all the bodies.

By the afternoon, hundreds had been killed on the riverbank. Soldiers and Rakhine villagers burned the bodies in deep pits dug in the sand, in an apparent effort to destroy evidence of the killings.

Survivors described young children being pulled away from their mothers and killed – thrown into fires or the river, or beaten or knifed to death on the ground. Hassina Begum, 20, tried to hide her 1-year-old daughter, Sohaifa, under her headscarf, but a soldier noticed. “He took my daughter from me and threw her alive into the fire,” she said. “What could I do?… He had a knife in his hand and a rifle over his shoulder.”

Soldiers brought women and children to nearby houses in small groups, where many were raped and sexually assaulted, stabbed, and beaten. Nine women and girls interviewed by Human Rights Watch said they were raped or sexually assaulted, and witnessed the rape of others. Afterward, soldiers locked the houses and set them on fire, leaving the women and children inside, most unconscious or dead. Shawfika described escaping the burning house:

I woke up and realized I was in a pool of sticky blood. I tried to wake the others up but they didn’t move. Then I broke through the [bamboo] wall and escaped.… All the houses in the area were on fire. I could hear women screaming from some of the other houses. They could not escape from the fires.

Shawfika, like many other women interviewed, was the only survivor from the group of eight women and children whom soldiers forced into the house. Witness accounts suggest that the pattern of rape and killings in the houses was repeated many times.

Satellite imagery analyzed by Human Rights Watch confirms that the Rohingya villages of Tula Toli and nearby Dual Toli were completely destroyed by arson – a total of 746 buildings – while the neighboring non-Rohingya villages remain intact. An estimated 4,300 Rohingya villagers lived in Tula Toli prior to the attack.

The Burmese military and government have repeatedly denied allegations of security force violations. On November 13, a Burmese army investigation team issued a report asserting that security forces had committed no abuses during the Rakhine State operations, and that there were “no deaths of innocent people.”

Yet accounts from Tula Toli support the conclusion that since August 25, the Burmese military has committed abuses against the Rohingya that amount to crimes against humanity, including murder, rape, persecution, and forced deportation. The report includes lists of numerous families decimated in the Tula Toli attack, with names of more than 120 killed, recounted by those who were often the sole survivors from their family. A report released on December 12 by Médecins Sans Frontières (MSF) found that at least 6,700 Rohingya died due to violence in the month after military operations began in late August, based on mortality surveys conducted in refugee camps in Bangladesh.

The Burmese government should immediately cease its campaign of ethnic cleansing and urgently provide unimpeded access to Rakhine State for humanitarian aid groups and the United Nations Fact-Finding Mission. The UN Security Council and concerned governments should impose targeted sanctions on Burmese military leaders and key military-owned enterprises, including travel bans and restrictions on access to financial institutions, as well as a comprehensive military embargo on Burma.

“The UN and foreign governments need to ensure that those responsible for these grave abuses are held accountable,” Adams said. “Condemnations are not enough to bring justice to the victims of Tula Toli. Concerted international action is needed now.”