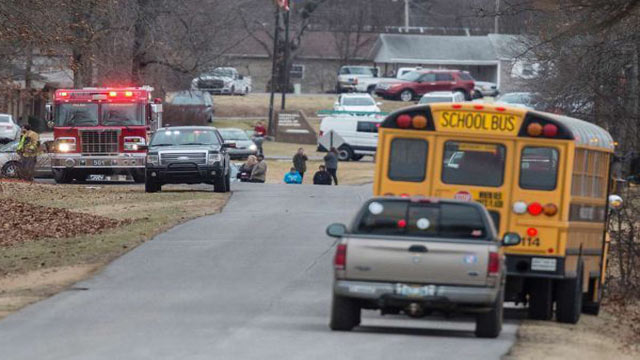 New York, Jan 24 (Just News) : Two teenagers were killed and dozen others injured when a 15-year-old student opened fire at a high school in Kentucky on Tuesday.

He was determined. He knew what he was doing, said Alexandria Caporali, who grabbed her stunned friend and ran into a classroom as their classmates hit the floor, reports AP.

He kept firing, she said, until he ran out of ammunition and took off running, trying to get away. Police arrested their suspect moments later, leading him away in handcuffs to be charged with murder and attempted murder. Authorities did not identify the gunman responsible for the nation's first fatal school shooting of 2018, nor did they release any details about a motive.

He was apprehended by the sheriff's department here on site, at the school, thankfully before any more lives could be taken, Webb said.

Seventeen students were injured, 12 of them hit with bullets and five others hurt in the scramble as hundreds of students fled for their lives from Marshall County High School. Many jumped into cars, or ran across fields and down the highway, some not stopping until they reached a McDonald's restaurant more than a mile away. Parents left their cars on both sides of an adjacent road, desperately trying to find their teenagers.

No one screamed. It was almost completely silent as people just ran, said Caporali, 16. She said most students knew what to do because they are drilled throughout the year on how to respond to an active shooter at school.

The attack marked the year's first fatal school shooting, 23 days into 2018, according to data compiled by the Gun Violence Archive, which relies on media reports and other information. The anti-violence group Everytown for Gun Safety has counted at least 283 shootings at schools since 2013.

Kentucky Gov. Matt Bevin and several people in Benton said they couldn't believe a mass shooting would happen in their small, close-knit town. But many such shootings across the nation have happened in rural communities.

Marshall County High School is about 30 minutes from Heath High School in Paducah, Kentucky, where a 1997 mass shooting killed three and injured five. Michael Carneal, then 14, opened fire there about two years before the fatal attack at Columbine High School in Colorado, ushering in an era when mass school shootings have become much more common.

Meanwhile, in the small North Texas town of Italy, a 15-year-old girl was recovering Tuesday after police said she was shot by a 16-year-old classmate in her high school cafeteria on Monday, sending dozens of students scrambling for safety. Police in Louisiana, meanwhile, are investigating shots fired Monday as students gathered outside their charter school.

It's horrifying that we can no longer call school shootings 'unimaginable' because the reality is they happen with alarming frequency, said former Rep. Gapielle Giffords, who survived being shot in the head in 2011. She called on Congress to strengthen gun laws.

Tuesday's shooting, moments before classes would have begun, disrupted some happy moments in the noisy "commons" area at the center of the school, where several hallways meet and students gather between classes.

Lexie Waymon, 16, said she and a friend were talking about the next basketball game, makeup and eyelashes when gunshots pierced the air.

I blacked out. I couldn't move. I got up and I tried to run, but I fell. I heard someone hit the ground. It was so close to me," Waymon said. "I just heard it and then I just, everything was black for a good minute. Like, I could not see anything. I just froze and did not know what to do. Then I got up and I ran.

Her friend, Baleigh Culp, told the AP in a text message that they were joking and laughing until they heard a loud bang that sounded like someone's books hitting the floor.

That's what i expected it to be, until i saw a body drop on the ground, Culp wrote. There was bullets flying everywhere. I ran straight out the door and headed to the highway as fast as i could.

It was chaotic outside the school as parents and students rushed around trying to find each other, said Dusty Kornbacher, who owns a nearby floral shop. All the parking lots were full with parents and kids hugging each other and crying and nobody really knowing what was going on, she said.

They was running and crying and screaming, said Mitchell Garland, who provided shelter to between 50 and 100 students inside his nearby business. "Everyone is just scared. Just terrified for their kids, he added. We're a small town and we know a lot of the kids.