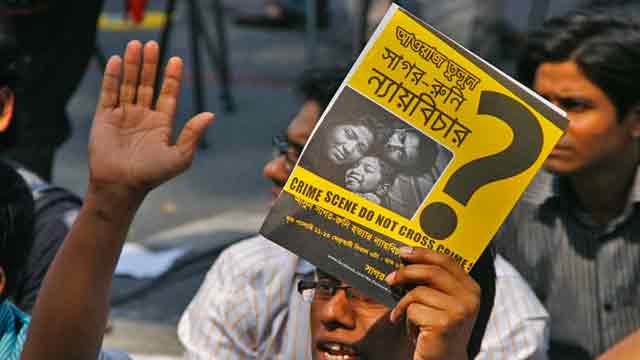 Dhaka, Feb 11 (Just News): Journalists today held a rally demanding arrest and exemplary punishment to the killers of journalist couple Sagar Sarowar and Meherun Runi, who were brutally killed on this day six years back.

They also urged journalists in both electronic and print media across the country to be united and to wage a tougher movement for the justice of Sagar and Runi.

“If we do not get united, we will have to face the same consequence like Sagar and Runi,” a journalist leader said at the rally, which was arranged by Dhaka Reporters' Unity (DRU) on its premise around 11:30am.

The law enforcers are yet to submit any progress report of the investigation in the murder case, said the journalist leaders.

The couple's only child Mahir Sarowar Megh, who was only five at the time, was in the apartment during the murder.

Rapid Action Battalion (Rab), which has been probing the case for five and a half years after the Detective Branch of police failed, has not made any progress in finding out the perpetrators.

Law enforcers, mainly Rab, has extended the time for submitting the progress report of the investigation 54 times, court sources said.