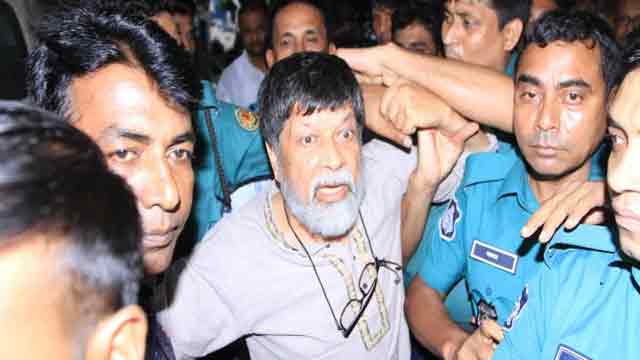 Dhaka, Aug 25 (Just News): A total of 426 academic and professional staff from Australian universities have urged for immediate and unconditional release of acclaimed photographer Shahidul Alam, who is arrested in a case for allegedly spreading propaganda and false information against the government.

In a statement addressed to Home Minister Asaduzzaman Khan, the Australian academics and professional staff yesterday condemned the detention, alleged torture, and proposed prosecution of Dr Shahidul Alam, who is also an adjunct professor of Royal Melbourne Institute of Technology (RMIT).

“Dr Alam is an internationally esteemed journalist, photographer, activist and educator. He is a good friend of Australia and an invaluable member of our academic community. He has a global reputation as a champion of the peoples of Bangladesh and South Asia generally, and his energetic defence of human rights across the region is exemplary. Dr Alam has spent a lifetime exposing injustice and challenging mass-media bias,” they said in the statement.

The Australian academic and professional staff also urged the authorities to ensure that activists, human rights defenders, journalists, academics and members of the political opposition and other members of the public are able to peacefully exercise their rights to freedom of expression, freedom of peaceful assembly and freedom of association.

They also condemned the recent violence against peaceful student protesters, and journalists covering these protests, according to the statement.

Meanwhile, family members of Shahidul Alam have submitted an application to the jail authorities to provide medical assistance to the noted photographer and allow him permission to go through medical tests independently, reports Bangla daily Prothom Alo quoting his lawyer Sara Hossain.

The application, addressed to the Dhaka Central Jail super, has been sent via e-mail on Friday, the lawyer said today.

Shahidul Alam is having difficulty to eat as he has pain in his jaw and gum. He is also suffering from respiratory complication and problem with eyesight, she said.

Since he did not have these complications prior to August 5 when he was picked up by plainclothes detectives from his residence, the application has urged the jail authorities to allow him independent medical examinations, Sara Hossain added.

Earlier on Wednesday, August 22, family members and colleagues urged the government and the jail authorities for providing immediate medical treatment to Shahidul Alam, citing his illness.

Shahidul Alam’s wife Rahnuma Ahmed and his co-worker, journalist Saydia Gulrukh came up with the plea in a statement after visiting the acclaimed photographer at the Keraniganj Central Jail today on the occasion of Eid-ul-Azha.

Shahidul, 63, was picked up by law enforcers on August 5 night from his apartment in Dhaka’s Dhanmondi.

The following day, police produced him before the Dhaka Chief Metropolitan Magistrate’s Court showing him arrested in a case filed under the controversial Section 57 of Information and Communication Technology (ICT) Act on charges of spreading propaganda and false information against the government during the recent student movement for safe roads, and sought a 10-day remand.

The court placed him on a seven-day remand.

On August 12, he was produced before the Dhaka CMM Court around 3:00pm on completion of his seven-day remand, and the court ordered to send him to jail.