Release of students before Eid demanded 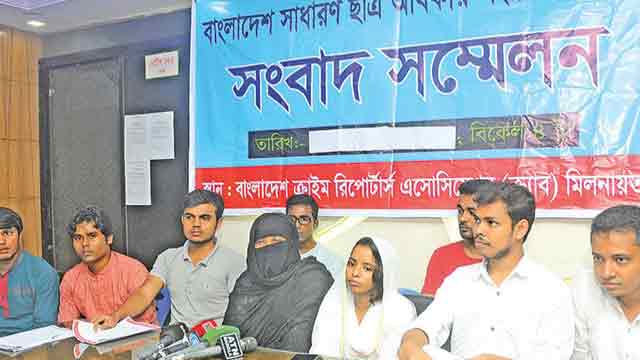 Dhaka, Aug 17 (Just News): Protesters rallying for reform of quota system in public service recruitment on Friday demanded unconditional release of arrested protesters of quota reform and road safety before Eid-ul-Azha saying that the authorities arrested their fellows in an ill attempt to foil their movement.

Leaders of the quota reform protesters’ platform Bangladesh General Students’ Rights Protection Council at a press conference at Crime Reporters Association in Dhaka also demanded withdrawal of remands of the protesters in custody and ‘false and fabricated cases’ filed against them.

They said that council joint convener Lutfun Nahar Luma was never engaged in road safety movement and police arrested her on false accusation.

At least 100 people, mostly students, were arrested in 52 cases filed between July 29 and August 15 over the violence, triggered by attacks of protesters reportedly by activists of the ruling Awami League and its front bodies including Bangladesh Chhatra League, during the latest student protests for road safety.

On August 15, police arrested Lutfun Nahar, also an Eden College student, at her uncle’s house at Belkuchi in Sirajganj on allegation of spreading rumours on social media during road safety movement.

‘We demand cancellation of Lutfun Nahar’s remand in custody and withdrawal of false case filed against her,’ council joint convener Ataullah said at the press conference.
Lutfun Nahar was actually arrested for quota reform movement as he was never participated in the road safety movement, said Ataullah.

Lutfun Nahar was in Gopalganj and Sirajganj between July 3 and August 15, Ataullah said, adding that it was unfortunate that she was arrested based on propaganda of vested interests.

He said that a video of August 4 went viral on Facebook and other social media sites showing a female wearing pink dress covering her face talking about the protests. Lutfun Nahar had once participated in a television talk show wearing a pink dress and police arrested her on suspicion for having a pink dress although she had no connection with the video, Ataullah said.

Authorities are arresting quota reform protesters to demoralise protestors and foil their movement, he said.

Most of the leaders of Bangladesh General Students’ Rights Protection Council are now on the run fearing arrest and disappearance.