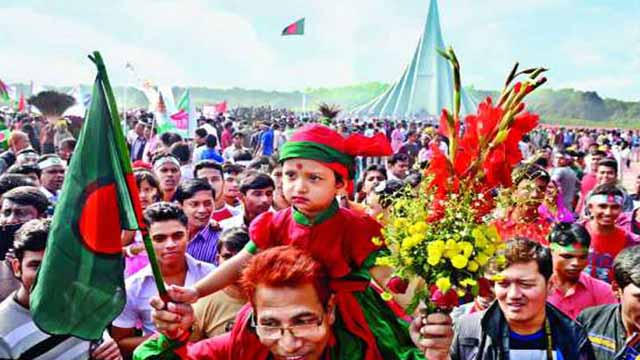 On this day in 1971, Pakistani occupation forces surrendered after a nine-month war resulting in free, independent and sovereign Bangladesh.

The day is a public holiday.

On March 7 in 1971, Bangabandhu Sheikh Mujibur Rahman in his fiery speech called on the freedom-loving Bangalis to wage a decisive struggle against the Pakistani rulers.

President Abdul Hamid and Prime Minister Sheikh Hasina paid rich tributes to the martyrs of the Liberation War by placing wreaths at the National Mausoleum at Savar with the rise of the sun.
The President and the Prime Minister laid wreaths at the monument at 6:34am and stood there in solemn silence for some time as a mark of profound respect to the memories of the martyrs of the 1971 Liberation War.

The national flag was hoisted atop all government and private buildings while the government and semi-government buildings and other public places were illuminated and roads and islands decorated with flags and festoons in all cities of the country on the occasion.

National dailies brought out supplements while state-owned and private televisions and radios are airing special programmes highlighting the significance of the day.

Special prayers are being offered in mosques, temples, churches, pagodas and other places of worship seeking divine blessings for the peace and progress of the country.

The President will accord a reception to freedom fighters at Bangabhaban in the afternoon.

Destitute children are being allowed to visit the children park in the capital on the day free of cost. Improved diets are being served in jails, hospitals, orphanages and vagrant homes across the country.