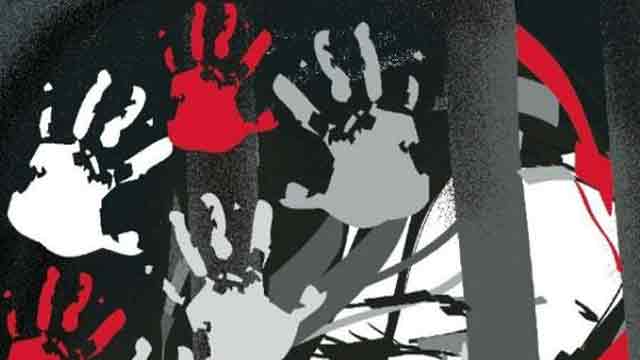 Quoting the two victims, relatives claimed that three security personnel of Border Guard Bangladesh (BGB) on Wednesday night called the two girls with the assistance of one Jonerun Tripura of Ramgoti Tripura Para and forcefully raped them.

The alleged security members-- Sumon, Maruf and Rabiul -- also threatened to kill them if they disclose the rape incident to anyone, said elder brother of one of the victims.

The accused were security personnel in uniforms and with arms, said elder brother of another victim quoting his 12-year-old sister.

Lt Col M Asaduzzaman, commanding officer of BGB 11 in Naikkhongchhari, said that it was a conspiracy against BGB to remove Tirer Deva BGB camp of the area, adding that they were investigating the matter.

“As the area is a crime zone of a group of local terrorists, they are hatching conspiracy against the security personnel so that the BGB withdraws the camp from the area,” the BGB official added.

Md Zakir Hossain Majumder, superintendent of Bandarban police told our correspondent that “as the allegation was brought against three members of a security force, we are investigating the matter.”

A case was filed with Lama Police Station against the three persons in this connection today, SP Zakir Hossain Majumder added.

However, Civil Surgeon of the district Dr Aung Swi Prue Marma did not want to make any comment in this connection.

Policemen were not allowing rights activists or journalists to talk to the victims, said Daw Nai Prue Naly, a human right activist of the district

“We are concerned about their safety. Police didn’t allow us to talk with the victims, they are in some sort of confinement at the hospital in the name of police protection,” said Daw Nai Prue Naly.

However, no one was arrested in this regard. –The Daily Star