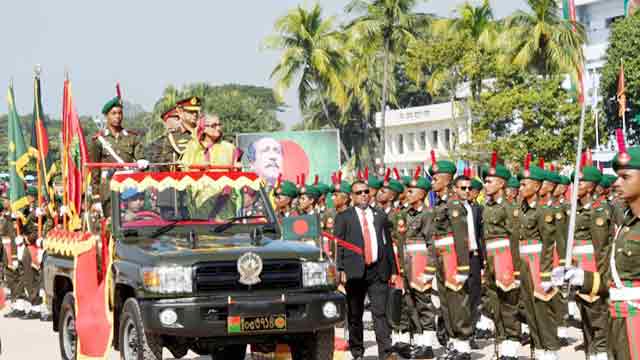 ‘Your first and foremost vow will be to protect the country's independence and sovereignty even with the supreme sacrifice. You'll have to stand beside people and serve the country selflessly,’ she said.

The prime minister was addressing the President Parade marking the commissioning of the cadets of 75th BMA Long Course at Bangladesh Military Academy Parade Ground in Bhatiari.

‘You're the children of this country...integral part of people.....so you all have to remain beside general people during their happiness and woes,’ she said.

Sheikh Hasina said the Bangladesh Army is now quite different from the one a decade back in terms of infrastructure, strategy and technology.

‘The present Army is much more developed, skilled and smart one due to the combination of modern trainings and equipment,’ she said adding, ‘We've enhanced the capacity of Bangladesh Army to a large extent alongside developing its infrastructure in the last nine years.’

She said it was a memorable day for Bangladesh Military Academy as the cadets are going to be commissioned as lieutenants on completion of three-year training for the first time.

Hasina urged them to show loyalty to their senior officers and sympathy to their subordinates.

She said the Bangladesh Army had been able to earn praises from all quarters by showing competence and professionalism while performing their duties both at home and abroad.

Role of Bangladesh Army in UN peacekeeping missions is appreciated across the globe, she said adding, ‘We want you will maintain this success.’

The prime minister said her government is working to turn Bangladesh Military Academy into a modern institution ensuring international standards.

Praising the Army for showing its capacity in various sectors, she said the Army played an important role in setting up shelter camps for displaced Rohingyas, distribution of relief items in disciplined way and preparation of identity cards for them in the recent time.

The prime minister reviewed the smartly turned out parade riding an open jeep and took salute of the impressive march past as the chief guest.

Hasina distributed awards among the best cadets for their outstanding performance in the academy.

Ministers, advisers, parliament members, the chiefs of the threes services, diplomats and high civil and military official and guardians of the newly-commissioned officers were present.

A total of 350 cadets —343 Bangladeshis, five Palestinians and two Sri Lankans — got commission at the programme.

Battalion Senior Under Officer Sadmanur Rahman who was adjudged the best all-round cadet in the 75th BMA Long Course, received the 'Sword of Honour' from the prime minister. He also obtained 'Army Chief Gold Medal' for acquiring the highest standard in the military subjects.