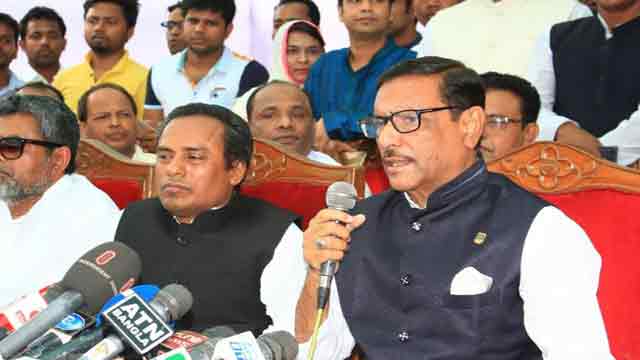 “The people are happy with the development being carried out by prime minister Sheikh Hasina, so we’ve no fear and worry over the next general elections,” claimed Quader while speaking to newsmen at a programme in Dhanmondi of the capital.

Also the road transport and bridges minister, Quader on behalf of the ruling AL was distributing rickshaw-vans among the poor, marking the anniversary of birth of country’s founding father Bangabandhu Sheikh Mujibur Rahman.

The AL leader went on to say, “We’ve won the fear through our developments and various achievements. The victory in the polls [next general elections for the ruling AL] is merely a formality.”

Claiming that the people have not responded to the call of main opposition Bangladesh Nationalist Party (BNP) for taking to the streets against the AL government, Quader said, “BNP has tried a lot to wage a street agitation, but people did not respond. It’s because the people don’t like negative politics of BNP. They’ve rejected BNP.”

“We’re undertaking various tactics to woo the young and women voters. And BNP is treading the path of conspiracy. It’s holding secret meetings with different local and foreign forces so that the elections can be foiled after creating instability in the country.”

The ruling party leader also claimed that thousands of BNP activists want to join the ruling AL, but the party is not accepting them.

“Thousands of BNP activists from across the country want to join AL, but we’re yet to get green signal from our leader [Sheikh Hasina] with regard to their joining,” said AL leader.