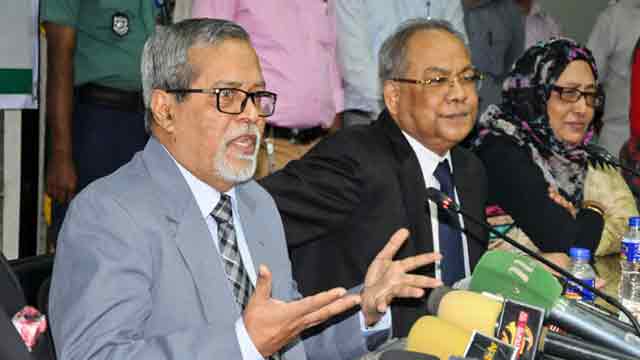 Dhaka, Sep 3 (Just News): The chief election commissioner KM Nurul Huda on Monday said the electronic voting machines would be used in next general elections based on opinion of the political parties, law reformation and EC's capacity.

He said the concern about electronic voting machine (EVM) among voters and political parties is natural.

"Because we are yet to inform them about its (EVM) use and benefits," the CEC said adding that the voters and political parties will be able to know everything about EVM gradually.

The CEC said this while addressing a programme at the Election Training Institute (ETI) at Agargaon in Dhaka.

He inaugurated the training programme on EVM there.

If the government passes necessary laws and a congenial atmosphere is created then the voters will think about using EVM on a trial basis at some polling centres, the CEC said.

The CEC also said they will think later whether EVM will be used in national elections.

While addressing media yesterday, Prime Minister Sheikh Hasina said EVMs should not be imposed hurriedly as the machines need to be introduced on a limited scale in national elections.

“Many countries have the EVM system. I was always and am still in favour of it. Yes, it's right that it shouldn't be imposed hastily as it's a matter of practice. We'll have to examine it,” she said while addressing a press conference at the Gono Bhaban in Dhaka.