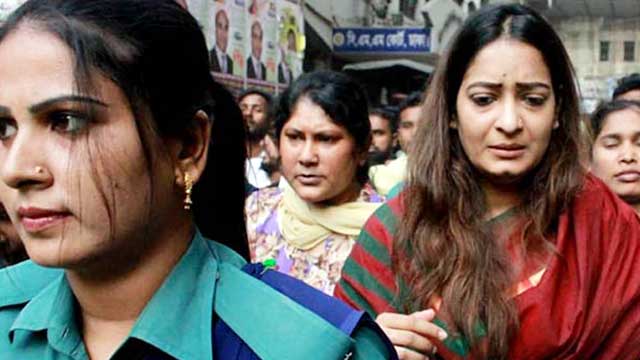 Metropolitan Magistrate Satyabrata Sikder passed the order after Detective Branch Inspector Md Kamrul Islam, also the investigation officer (IO) of the case, produced them before it with a 10-day remand prayer for each.

After holding hearing, the judge rejected the petitions filed by the accused seeking bail in the case and placed them on five-day remand each.

The judge, however, ordered the law enforcers to be cautious while interrogating the female accused and allowing only female police officials to quiz them, our court correspondent reports.

Nipun along with singer Baby Nazneen was detained last evening from Kakrail area of Dhaka. Baby Nazneen, an aspirant candidate from BNP, was later released from the DB office on Minto Road.

Senior BNP leaders Mirza Abbas and Ruhul Kabir Rizvi are among the 488 people accused of attempting to foil the upcoming parliamentary polls in three cases.

The cases were filed for alleged attacks on police and causing violence in Naya Paltan on Wednesday.

Many others, not named in the cases, were also accused.

The clash in front of the BNP’s central office left at least 20 BNP activists and as many policemen injured.