Resist polls if you can 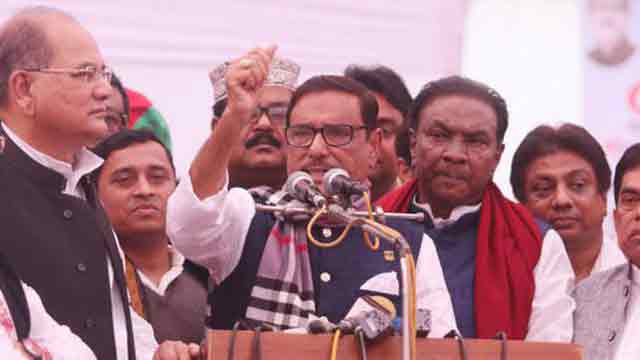 Addressing a public rally at the capital’s Banani playground organised by his party in observance of what it calls “Victory Day for Democracy”, Quader said people under the leadership of Sheikh Hasina would resist the BNP.

The anniversary of the one-sided 5 January 2014 polls is observed in different manners by different political parties.

As high as 153 members of parliament (MPs) out of 300 were elected unopposed in the lopsided 5 January elections with the BNP and several other opposition parties boycotting the polls.

The opposition parties were demanding a non-party poll-time government to oversee the general elections, but the ruling AL, which was in power then too, stuck to its gun to holding the polls under its own supervision.

In protest, the opposition political parties resorted to violent street campaign in the run up to the election, leading to the killing of over 100 people - mostly opposition activists - with 20 on the day of balloting alone.

The 11th parliamentary election is scheduled to be held by the third week of January 2019, but the country’s two major political rivals - AL and BNP - are at opposite ends over the question of the type of poll-time government.

The AL is insisting that the next polls will be held under Sheikh Hasina-led government while the BNP is saying the country will have no election under Hasina.

He said the BNP will commit suicide once again if it doesn’t join the next elections.

Quader claimed that AL must be saved if the country’s liberation war and its spirits are to be saved.