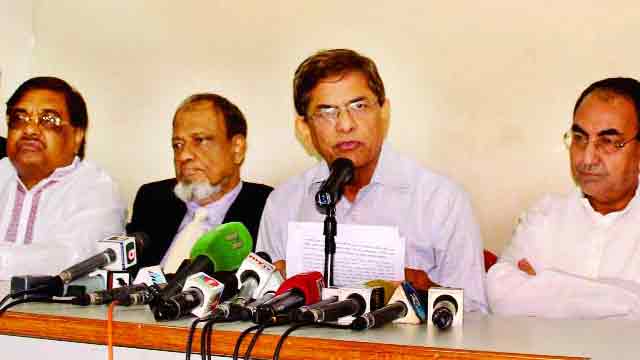 The Bangladesh Nationalist Party (BNP) leader said this during a press briefing at the party’s Naya Paltan central office in the morning.

BNP held the briefing to protest mass arrest of its leaders and activists, including standing committee member Gayeshwar Chandra Roy, on Tuesday night.

On Tuesday, the BNP men came to the High Court area to express solidarity with party chairperson Khaleda Zia who earlier on the day appeared before a Dhaka court in the Zia Charitable Trust graft case.

The police claimed that brickbats were thrown on them from the BNP rally when the BNP chief was returning from the Bakshibazar special court.

Police also said BNP leaders and activists then vandalised police vehicles in front of the High Court and snatched two of their activists from prison van.

Four policemen including an additional deputy commissioner of police (ADC) were injured in the attack.

Police filed two cases in this connection on Wednesday morning.