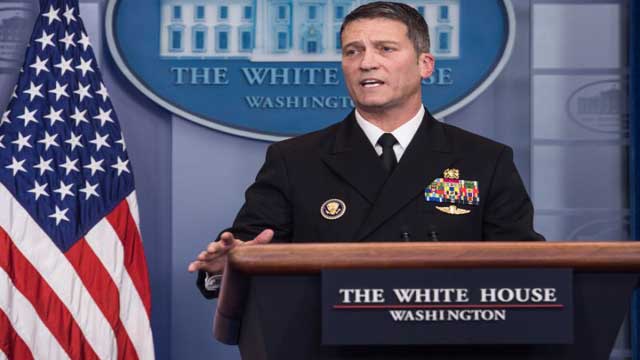 Physician Dr. Ronny Jackson made this comment as part of a comprehensive, nearly hourlong review of the president’s recent physical assessment.

The US president passed a test for signs of dementia and is in overall excellent health, but needs to shed weight by cutting calories, fats and carbohydrates and starting a daily exercise routine, the White House physician said.

Jackson shared the outcomes of Trump’s exam with reporters at the White House press briefing, including his 75-inch height, 239-pound weight, total cholesterol of 223 and resting heart rate of 68 beats per minute.

Given his height and weight, the president's body mass index falls just short of the defined threshold for obesity. According to a calculator provided by the National Institutes of Health's National Heart, Lung and Blood Institute, Trump's BMI is 29.9. The marker for obesity is a BMI of 30, according to the institute.

Despite the number, Jackson said that Trump's exercise stress echocardiogram was “above average based on age and sex,” but they did discuss “diet, exercise and weight loss.

“I think a reasonable goal over the next year or so would be [for Trump] to lose 10 to 15 pounds,” Jackson said. "We talked about diet and exercise a lot. He is more enthusiastic about the diet part than the exercise part but we're going to do both.”

The doctor noted that a nutritionist would work with the president in an attempt to change his eating habits, which are said to include a steady stream of fast food and red meat.

Asked by journalist on Trump’s diet and no known exercise routine could achieve such relatively strong physical results, Jackson said there was no definite answer.

“It is called genetics. I don't know,” Jackson said. "Some people have just great genes. I told the president that if he had a healthier diet over the last 20 years, he might live to be 200 years old. I don't know.

Questioned by the press for nearly an hour, Jackson additionally shared that the president takes aspirin for "cardiac health;" Propecia, a medication intended to prevent hair loss; Soolantra Cream, to combat the skin disease Rosacea; and Crestor, a cholesterol-lowering drug. Trump's total cholesterol of 223 would be considered high under typical standards.

Jackson did admit that he thinks Trump "doesn't sleep much." The doctor said that he did not ask the president about his habits specifically, but guessed that he sleeps "four to five hours per night."

In total, Trump's physical last week lasted over four hours, said Jackson, who added that he worked with 12 consultants on the evaluation.

Despite questions swirling about the president's cognitive abilities given reports that he sometimes repeats himself during meetings, Jackson said that Trump scored a 30 out of 30 on the Montreal Cognitive Assessment-self described as a "cognitive screening test designed to assist Health Professionals in the detection of mild cognitive impairment and Alzheimer's disease." The doctor added that he doesn't believe appraisals of the president's mental state should be made by persons who have not examined him.

"There's no indication that he has any kid of cognitive issues," Jackson said. "On a day-to-day basis, it has been my experience the president is very sharp — very articulate when he speaks to me. I've never known him to repeat himself around me... I found no reason to think that the president has any issues whatsoever with his thought process."

During the presidential campaign, Trump's personal doctor, Dr. Harold Bornstein, proclaimed: "If elected, Mr. Trump, I can state unequivocally, will be the healthiest individual ever elected to the presidency." Jackson would not comment on that prior comparison Tuesday, saying that he could only assess Trump today.

Jackson maintained optimism about Trump's continued ability to withstand the pressures of the presidency and the lifestyle required by those who hold the job, saying "he is fit for duty."