I need to remain calm, will be careful next time, says Shakib 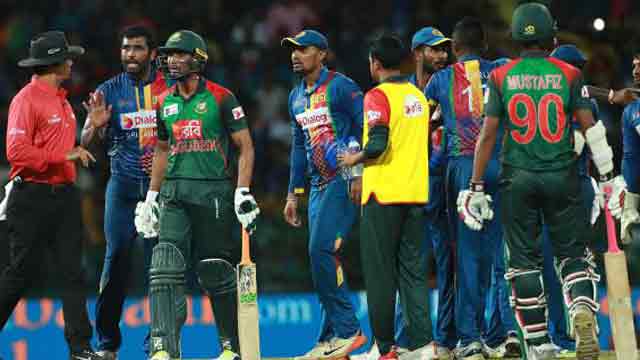 Dhaka, Mar 17 (Just News): In the 6th T20I match of the Nidahas Trophy tri-series between Sri Lanka and Bangladesh, the tensions came to a boil in the final over. With the visitors needing 12 runs to win in 6 balls, Isuru Udana bowled two short balls which led to the run out of Mustafizur Rahman.

The dismissal caused a fight to break out between players with Bangladesh wanting the delivery to be declared as a no-ball for being the second bouncer in the over.

After an argument between Bangladesh’s substitute fielders and Sri Lankan fielders, skipper Shakib Al Hasan waved his team to return to the pavilion and threatened to stage a walkout. The umpires came out in the middle to diffuse the tension and after several minutes, luckily, the play was resumed. Mahmudullah struck a six on the penultimate ball to seal the visitors’ final berth.

Speaking to reporters after the match, Bangladesh skipper Shakib Al Hasan admitted that he should have been calmer in the circumstances. “Many things happened that shouldn’t have happened. I need to remain calm. I was overjoyed and excitement was there. I must know how to react next time. I will be careful,” he said.

Explaining what caused the tensions to break out, the allrounder said the decision by the umpire to not judge it as an illegal delivery was not a fair one. “I don’t want to talk about it, but what happened was that the square-leg umpire called a no-ball and after a discussion they cancelled it. I didn’t think it was the right decision. I don’t know what happened after the first ball, which was a bouncer. But after the second ball, the umpire called a no-ball. We are all human, we should take it in the chin and move forward,” he said.

The 30-year-old further added that the incident on the field will not spoil relations between the two teams. “What happens in the field should never spill over off the field. To be honest, we are all good friends. We see each other in the Bangladesh Premier League and Dhaka Premier League. The two boards have great relations. We help each other a lot. Just like I would want my team to win at all cost, they would have the same feeling. I am sure that both teams will never let it go off the field,” he said.

Bangladesh will face off against India in the Nidahas Trophy 2018 final on Sunday.