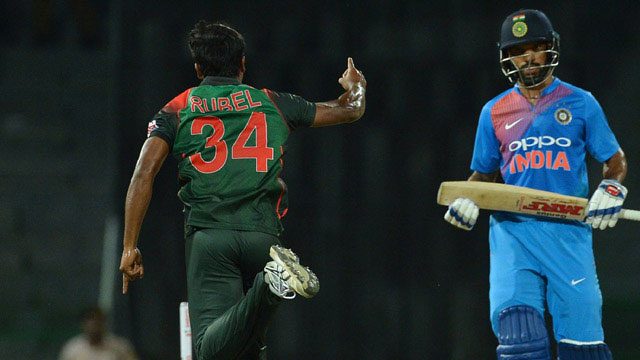 Dhaka, Mar 18 (Just News): India are expecting a tight battle against Bangladesh in the Twenty20 tri-series final on Sunday.

India's wicketkeeper-batsman Dinesh Karthik says Bangladesh are always a tricky opposition and that his team would bring high intensity to the Twenty20 tri-series final between the two sides on Sunday.

Skipper Rohit Sharma's team was the first to book its place in the final after winning three of its four games at Colombo's R. Premadasa Stadium.

India hold a psychological edge going into the tournament decider, with a 7-0 record in T20s against lowly-ranked Bangladesh.

But Karthik insisted India would not take Bangladesh lightly after the Shakib Al Hasan-led team stunned Sri Lanka, beating the hosts by two wickets on Friday to reach the final.

"When we play Bangladesh, if we win, it's like 'Ok, you've won against Bangladesh', but if we lose, it's like: 'Dude, you've lost to Bangladesh. What are you doing?'"

India went into the tournament without top guns Virat Kohli and Mahendra Singh Dhoni, and lost their opening match to Sri Lanka, but soon bounced back to win three straight games.

Karthik, a powerful middle-order batsman who is mostly a second-choice wicketkeeper behind Dhoni, said the team has not lost focus in the absence of big names.

"The first thing (Sharma)... said was that although we have a few of our other players missing, we're looking to play exactly the sort of cricket that we've played in the past one year. We're looking to win every match," Karthik said.

India are third in the world T20 rankings, with Pakistan at the top, while Bangladesh are 10th below minnows Afghanistan.