Germany out of World Cup 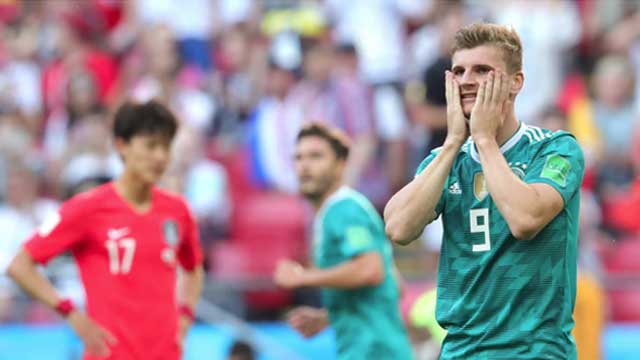 The four-time winners, who had not been eliminated in a World Cup first round since 1938, were a shadow of their once dominant selves, managing only two goals in their three group games.

South Korea, also eliminated, had the best early chance of the game when Germany keeper Manuel Neuer spilled a free kick in the 19th minute but managed to recover quickly and slap the ball away.

Nervous Germany increased the pressure after the break and poured forward but despite a one-sided second half they could not find the back of the net before South Korea’s last-gasp double.

Swedes beat Mexico 3-0 but both qualify for last 16

Reuters reports from Yekaterinburg: Sweden and Mexico both qualified for the round of 16 at the World Cup after the Swedes won 3-0 in their Group F match on Wednesday.

Having dominated the first half, Sweden went ahead with a fortuitous goal in the 51st minute when Viktor Claesson completely mis-kicked his shot but the ball flew straight to Ludwig Augustinsson who fired past Guillermo Ochoa.

The Swedes extended their lead in the 62nd minute when Andreas Granqvist fired home a penalty after the referee ruled that Marcus Berg had been fouled by Hector Moreno. The referee did not call for a VAR review despite Mexican protests.

Mexico's misery was compounded when Edson Alvarez put the ball in his own net in the 74th minute. But both teams finished on six points and qualified, three ahead of Germany who lost 2-0 to South Korea. Sweden topped the group on goal difference.