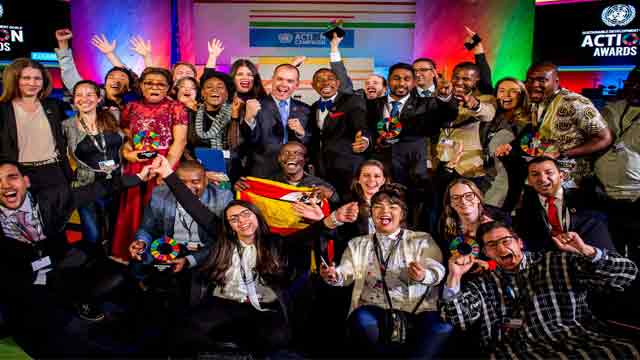 Bonn, Mar 23 (Just News): The winners of the first United Nations SDG Action Awards have been announced this Wednesday by the UN SDG Action Campaign, demonstrating the extraordinary momentum towards achieving the Sustainable Development Goals (SDGs) in different corners of the earth.

The Awards Ceremony was held in tandem with the second edition of the Global Festival of Action for Sustainable Development in Bonn, Germany, and honored initiatives in the categories of communicator, connector, includer, innovator, mobilizer, storyteller, and visualizer.

“These are ‘Action’ Awards because we need more than words: our winners dared to believe and act for change. They are perfect examples of the wonderful work that’s happening around the world led by thousands, if not millions, of people”, said Mitchell Toomey, Global Director of the UN SDG Action Campaign.

The winning initiatives are fighting corruption in Nigeria, mobilizing Belgians to implement the SDGs in their daily lives, empowering children through photography and digital skills in Bangladesh, promoting human rights education in Sri Lanka and much more. Evidencing the multi-sectoral engagement to achieve the SDGs, the winners span over private and public sectors, as well as civil society and grassroots movements.

Over 700 nominations from 125 countries in 7 continents were submitted. An expert judging panel evaluated submissions against the degree to which actions were deemed to be transformative, inclusive and impactful.

In addition, an open vote was held on the website of the UN SDG Action Campaign where visitors could rate their favorite among the 38 finalists to win the People’s Choice Award.

“Great solutions for the world’s challenges can come from anywhere. We hope everyone is inspired by these stories and consider submitting their nominations for future Awards. These are the first winners of a community that will continue to grow”, said Toomey.

The SDG Voices campaign, led by the City of Ghent, challenged cities in Belgium to encourage and mobilize Belgians to implement the SDGs in their daily lives. The campaign involved 23 different Ghent city services and departments. Nearly 6,000 citizens in 6 cities participated physically and many others took part via social media. Who accepted the award: Anja Van Den Durpel

Since 2015, this initiative has provided Comprehensive Sexuality Education (CSE) to over 1,000 teenagers and educated 40 rural mothers on maternal health in Ghana. Some of the girls who benefitted from the education and services were able to avoid pregnancy and stay in school. Founder and accepted the award: Richard Mawutor Dzikunu

The CYIAC anti-corruption awareness campaign “CYIAC Corruption Busters (CCB)” targeted the general public in Nigeria to draw attention to corrupt practices associated with their everyday life and its unimaginable negative impact on individuals and society. So far, it has reached over 1 million people through the CCB TV channel, social media engagement and “Corruption Busters goes to School”, a special school programme. Founder and accepted the award: Foluke Michael

Working to pave the way towards achieving the Agenda 2030 in the North-African country and the rest of the region, this initiative was created to express Moroccan youth’s engagement towards reaching the 17 Goals, with the aim to educate and empower Moroccans to achieve Agenda 2030, through the initiation and facilitation of partnerships between government officials, civil society institutions, youth voices and the UN SDG Action Campaign to break barriers. Founder and accepted the award: Hatim Aznague

This initiative gave tools to five daughters of garment workers aged between 7 and 15 to explain their daily lives in a short-film documentary. Over 4 days in March 2017 they compiled enough material to raise awareness on crucial issues like the supply chain transparency and the need for empowerment of women and girls. Having the girls as the directors and protagonists of the film allows viewers to understand the challenges they face daily in their lives. Founder: Bonnie Chiu Will. Who accepted the award: Lucile Stengel

The changemakers behind this project have collected Citizen Generated Data from every household in Lanet Umoja, Kenya, on all aspects relating to the SDGs, including security, food, agriculture, livelihoods, education, health, energy, water and sanitation. They have worked with community leaders in Kenya so they could understand the value of data in identifying the development gaps and the needs that they must address in order to achieve the SDGs. Founder: Al Kags. Who accepted the award: Benjamin Charagu

The Road to Rights is a unique platform where ideas get pumped up from youth. As a youth-led organization, the team works for educating and empowering young people through human rights education and 2030 agenda. The organization is established in 18 different countries where it uses sport, art, ICTs, tourism and other tools to engage people to educate themselves on their rights, responsibilities and goals. Founder and accepted the award: Ashan Perera