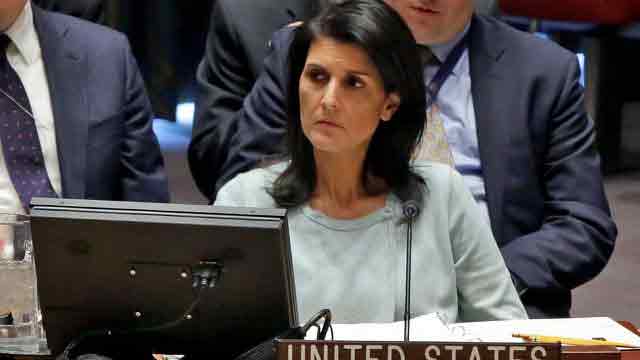 She made this statement on Thursday to mark the World Press Freedom Day.

U.S. Permanent Representative to the UN said “Journalists in many countries across the globe – and sometimes their families – are targeted with violence and imprisonment. As recently as April 30, a bombing in Afghanistan claimed the lives of at least nine journalists, and currently in Burma, two Reuters reporters remain in prison for reporting on atrocities in Rakhine State.”

The Committee to Protect Journalists, a U.S.-based NGO with UN accreditation, highlighted 2017 as the worst year on record for the number of journalists jailed worldwide.

For 25 years, the United Nations has marked May 3 as World Press Freedom Day to stand in solidarity with journalists worldwide who face harassment, persecution, imprisonment, and even death just for doing their jobs. Today, the United States joins fellow members of the UN Group of Friends for the Protection of Journalists to recognize the vital role that a free press plays in open societies.

“A free country cannot exist without a free press. The freedom to speak one’s mind is a protected right in America, but in far too many countries, governments limit or entirely block free speech and independent reporting. In brutal regimes where people are not free, journalists serve as eyes and ears to the rest of the world and as storytellers for those unable to speak for themselves, and they do so at great personal risk. Today we honor them for their strength and determination in bringing the world the truth,” said Ambassador Haley.