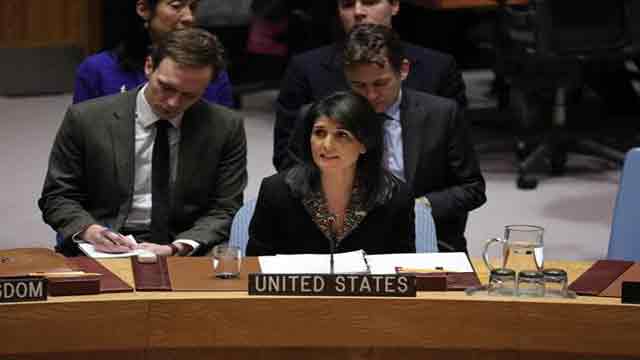 Ambassador Haley used this opportunity to highlight how the adoption of Resolution 2334 one year ago was a hindrance to peace efforts between the Israelis and the Palestinians.

“On the surface, Resolution 2334 described Israeli settlements as impediments to peace. Reasonable people can disagree about that, and in fact, over the years the United States has expressed criticism of Israeli settlement policies many times. But in truth, it was Resolution 2334 itself that was an impediment to peace. This Security Council put the negotiations between Israelis and the Palestinians further out of reach by injecting itself, yet again, in between the two parties to the conflict. By misplacing the blame for the failure of peace efforts squarely on the Israeli settlements, the resolution gave a pass to Palestinian leaders who for many years rejected one peace proposal after another. It also gave them encouragement to avoid negotiations in the future. It refused to acknowledge the legacy of failed negotiations unrelated to settlements. And the Council passed judgment on issues that must be decided in direct negotiations between the parties.

“If the United Nations’ history in the peace efforts proves anything, it is that talking in New York cannot take the place of face-to-face negotiations between the regional parties. It only sets back the cause of peace, not advance it. Our hand remains extended to both parties. We call on all countries that share this commitment to learn the hard lessons of the past and work to bring Israel and the Palestinian people in good faith to the peace table.”