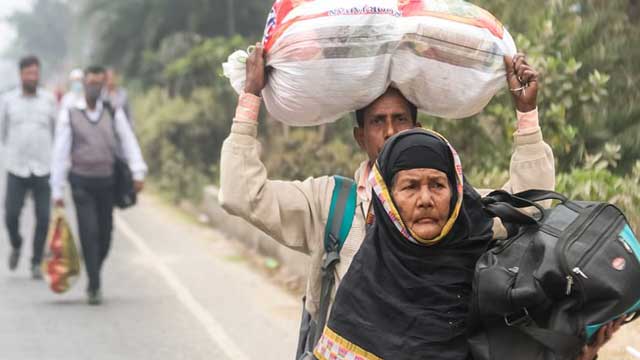 Students of Barishal University once again started demonstrations, blocking the Barishal-Kuakata highway on Saturday morning as their demands were not met within the 13-hour ultimatum they had given to the university authorities.

Vehicle movement between Bhola, Patuakhali, Barguna and Kuakata has come to halt because of the protests against an attack on some of their fellows by local transport workers on 16 February.

The protesting students took position on the highway in front of the main entrance of the university around 10:00am.

Earlier, the students withdrew the blockade at 8:00pm on Friday giving an ultimatum until 10:00am today to the university authorities to meet their three-point demand.

Meanwhile, the transport workers enforced a transport strike protesting at the arrest of two transport workers from Rupatoli bus stand area on Friday night in connection with the attack on non-residential students at different mess of the university. The arrested are – South Bengal Paribahan assistant Md Firoz Munshi and MK Paribahan supervisor Abul Bashar alias Rony.

No bus left Rupatoli bus stand from 10:30am today.

Barishal Kotwali model police station officer-in-charge Nurul Islam said they arrested two transport workers in connection with the attack on non-residential students at different mess in Rupatoli Housing area. The two were arrested following the case filed by the university administration. The arrested workers primarily acknowledged their involvement with the attack on students. Police is conducting drive to arrest the other attackers.

Around 7:15pm on Friday, the university’s teachers’ association president Arif Hossain, general secretary Khorshed Alam and proctor Subrata Kumar Das went to the protest spot and sought time until 10:00 Saturday to meet thestudents' demands. The students cleared the spot but announced they would resume their demonstration if the demands were not met in the stipulated time.

Students’ representative Amit Hasan said, “We have been staging the demonstration as the university authorities have shown a lax attitude to our demands. We are sorry for the suffering that the people face because of our road blockade but we have no other alternative.”

The protesting students alleged that they were attacked on Tuesday night. Though the injured students gave specific names of the attackers to the university administration, the administration filed a lawsuit against unidentified persons. The university administration only mentioned the beatings and injuries, but did not highlight the enormity of the attack. This was undermining the students and that is why the students have rejected the negligently filed case and announced they would continue their demonstration until their demands are met.

On Tuesday, two students of the university were allegedly manhandled by a few staff of Bangladesh Road Transport Corporation (BRTC) at the BRTC bus counter in the Rupatoli area of Barishal city.

Some students of the university blocked the bus terminal for two hours in protest. They dispersed only after police arrested a BRTC employee, identified as Rafique, in connection with the attack.

In retaliation, the transport workers armed with sticks barged into a university hostel and attacked a student, identified as Mahmudul Hasan Tomal, late Tuesday night.

As the news of the attack spread, thanks to social media, students from other hostels of the university rushed to the spot to save Tomal. The transport workers attacked Tomal's rescuers too, leaving 11 injured. Police brought the one-hour-long situation under control around 2:00am on Wednesday. The injured students were treated at Sher-e-Bangla Medical College and Hospital.

Subrata Kumar Das, proctor of Barishal University, said that as soon they got the information of the attack, senior officials rushed to the spot and subsequently ensured proper treatment of the injured.

On the following morning the students blocked the Barishal-Kuakata highway and placed their three-point demand. The students withdrew the blockade around 5:00pm that day as the university administration and high officials of Barishal metro police pledged to meet the demands. But the students continue their movement.

The university administration said following the demand of the students, university registrar M Mohsin Uddin filed a lawsuit with Kotwali model police station on Thursday. But no one was made accused in the case. Learning about this, the protesting students met university vice chancellor professor Sadequl Arefin and rejected the case.

Around 8:30 that night, a student representative Sujoy Subho, in a media briefing, said they gave names of three persons who led the attack. The injured students also mentioned several names but the university administration did not include any name in the case. This is unacceptable, he said.

He warned of tougher programmes from 5:00pm Friday if the university administration does not include names.