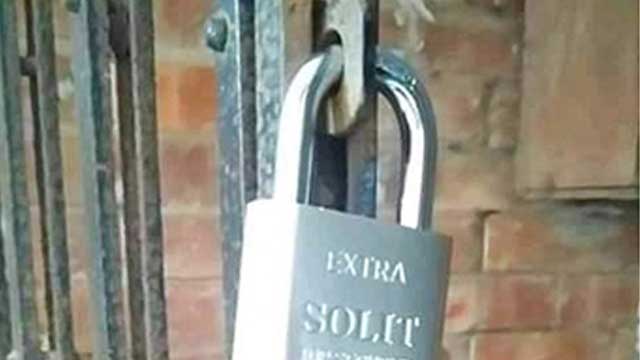 Jahangirnagar University students on Saturday unlocked the main gate of a dormitory as the authorities did not take any step to fulfill their 3-point demand, including hall reopening.

A procession of students protesting Friday’s attack on them by some residents of an adjacent village reached Fazilatunnesa Mujib Hall around 12:30 pm and unlocked the gate.

They also threatened to take control of other halls and go for a tougher movement if their demands are not met.

Their other demands are providing compensation to the victims and the treatment costs of the injured students.

Police personnel have taken position in front of the vice chancellor’s residence to avert any trouble. Members of the university’s proctorial team were also seen there.

“The students unlocked the hall gates but did not take position there. Now a meeting is underway between Education Minister Dr Dipu Moni and university VC Prof Farzana Islam over the issue. We are observing the matter,” he said.

A press release signed by Public Relations wing director Abdus Salam Miah said bringing out processions, holding meetings and unlocking hall gates go against the decision of the syndicate. The university authorities are urging all concerned to show respect to the syndicate’s decision, the release added.

On Friday, several students of the university were injured in an attack by the residents of a village adjacent to the campus.

Four motorcycles belonging to the students were set ablaze by locals at Gerua Bazar in the evening. Later, locals gathered in the area responding to an announcement from a mosque’s loudspeaker and attacked the students.

Proctor Hasan said some students were confined to their mess-house at Gerua village.

Eleven of the injured students are undergoing treatment at Enam Medical College Hospital.

On March16 last year, the government closed all the educational institutions to prevent the spread of coronavirus. The closure was extended several times, most recently until February 28 this year.