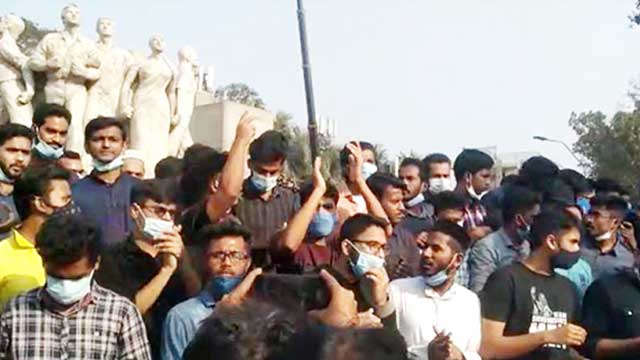 Public university students are continuing agitation programmes demanding the immediate reopening of universities and residential halls while many of them broke into the dormitories at Dhaka University and Jahangirnagar University ignoring the government’s Monday decision.

They gave the government an ultimatum for the reopening of universities and holding the pending examinations for not prolonging the session jams which the closure of the normal academic activities from March 18, 2020 for the COVID-19 outbreak have enforced on all educational institutions.

The education minister Dipu Moni in her Monday’s online briefing, however, asked the students to leave the campuses until the public and private universities and their residential halls are reopened in May.

‘During the period no examination will be conducted at any public or private university and only online classes will continue,’ Dipu Moni said

‘The students who have already occupied rooms at the residential halls must vacate them immediately,’ she warned and added, ‘Otherwise, the university authorities will take actions as per the law and will not bear any responsibility of any undesired incidents.’

The law enforcing agencies would also take actions under the purview of the law, she said.

Realising the concerns of the students, she said that the government decided to reschedule the Bangladesh Civil Service examinations schedules.

‘The government would also consider the age-bar set for appearing in the much-awaited recruitment tests so that incumbents do not miss the examination for the session jam created during the COVID-19 outbreak,’ she added.

Public universities would have to prepare the residential halls for residents maintaining the health guidelines, she said.

An estimated six lakh teachers and staff members of government schools, colleges and universities would also be vaccinated, she said adding that private university teachers and students would, however, remain out of the government’s priority-based vaccination programme.

‘Public universities will also reschedule admission tests following the government’s latest decision,’ she said, adding that the government would not plunge students into health risks at a time when the new strains of COVID-19 virus were detected in many countries like India and the UK.

She claimed that the government took the decision after holding a meeting with the vice-chancellors of public universities and the university grants commission chairman.

The ministry arranged the briefing against the backdrop of student agitation at different public universities demanding the reopening of halls while many of them broke into their respective residential halls without waiting for any permission from the authorities of Dhaka University, Jahangirnagar University and others.

During the cabinet meeting on Monday, prime minister Sheikh Hasina asked the ministries concerned to give an immediate assessment whether the situation was favourable for the reopening of educational institutions.

All educational institutions in the country remained closed from March 18, 2020 and the closure would continue till February 28 as per the latest instruction passed on February 14.

Tension mounted when JU students, who were staying at rented residences at village Gerua near the university, clashed with locals on Friday night left over 50 students injured while their belongings were vandalised.

Till the writing of this report on Monday night, students took position at nine out of 16 residential halls and expressed their determination to stay at the halls.

Holding a press briefing, students placed a five-point demand which included reviewing the government decision regarding the extension of the closure of the universities, vacating halls till May, filing a case against the identified attackers on the students on Friday and ensuring their arrest by 24 hours as well as forming a probe body regarding the alleged involvement of teacher, staff members and students in the attack.

‘If they do not obey the order, the syndicate after holding an immediate meeting will draw the next action,’ the proctor said.

Though a section of Dhaka University students, who broke into the Dr Muhammad Shahidullah Hall on Monday noon, left the hall a few hours after, protest continued at the base of Raju Memorial sculpture of the university demanding the reopening of the university residential halls on March 1.

During the protest, the agitating students also gave a 72-hour ultimatum to the university authorities to press home their demands.

Junaid Hussain Khan, a spokesperson on protest said, 'The halls have to be reopened before March 1 to avoid session jam. We are giving a 72-hour ultimatum, within which written notice must be given about the opening of the halls before March 1.'

They also served a memorandum to the vice-chancellor Professor Md Akhtaruzzaman in this regard.

Akhtaruzzaman, however, told the press that an emergency Academic Council meeting on Tuesday would decide regarding the reopening of the university and halls.

‘But during the COVID-19 situation even the autonomous universities across the globe are abiding by the government decisions considering the public health concerns,’ he said.

Citing two Barishal University students — Mahmudul Hasan Tamal and Siyam Hassan — New Age correspondent from Barshal reported that the agitating students would continue their programmes demanding the immediate reopening of halls and the resumption of normal academic activities to mitigate the session jams.

Shahjalal University of Science and Technology students also demanded continuation of the examinations as per the schedule, New Age Sylhet correspondent reported, adding that students said that they would give their formal announcement regarding the issue at a press conference on Tuesday.

SUST treasurer Anwarul Islam however, expressed his determination to stick to the government’s Monday decision.

K Sadik, a Bangla department student, said that they would hold a press conference on Tuesday to announce their demonstration programme, Islamic University correspondent reported.

Rajshahi University correspondent reported that the agitated students postponed their demonstrations following the government order and decided to vacate the campus.

Education minister Dipu Moni in the Monday briefing said that students had become restless due to the prolonged closure of normal academic activities, for the tension that built over whether they would be able to appear in the upcoming BCS examinations and these agitations also might be influenced by some vested interest groups that are trying to tarnish the achievements of the government.

‘We will enforce the government decisions in the greater interest of the students,’ she said.

‘All the students except for those who have a valid health ground must take vaccines for residing at the halls,’ she said.

The government orders must be applicable for all the 46 public universities and 107 private universities, she added.

Dipu Moni, however, admitted that the government could not bring all the students under the online and remote-class programmes initiated during the closure of the academic activities.

‘We will take decision regarding reopening of primary and secondary educational institutions after getting clearance from the national technical committee,’ she said.