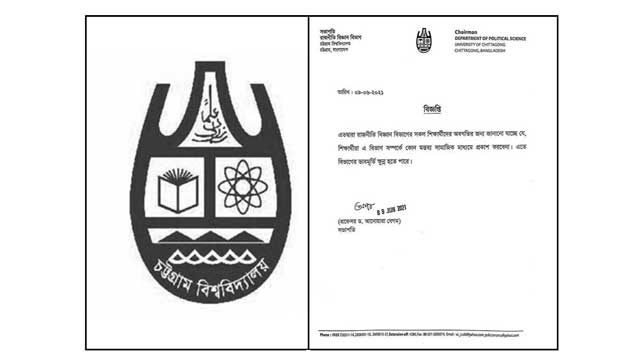 The Department of Political Science of Chittagong University has been criticised for issuing a notification asking its students not to write anything on social media.

The notification went viral on Facebook where people of all walks of life including the students of the department criticised the authorities for issuing such a statement.

Sharing the notification on his personal Facebook account, a student of the university wrote, "University is not an obedient slave producing factory."

While talking with The Daily Star several students of the department wishing not to be named said it should be clarified in which law/provision the departmental has issued such notification... It is completely against the freedom of speech. It should be withdrawn immediately.

Contacted, Prof Anowara Begum, chairperson of the department said it was not an order.

"Sometimes students get emotional and write a lot on social media about the department which could tarnish the image of the department. The statement was issued to make them conscious," she added.

Supporting the statement, CU Vice Chancellor Prof Shireen Akhter said they will go for action against those who write anything defamatory about the university.