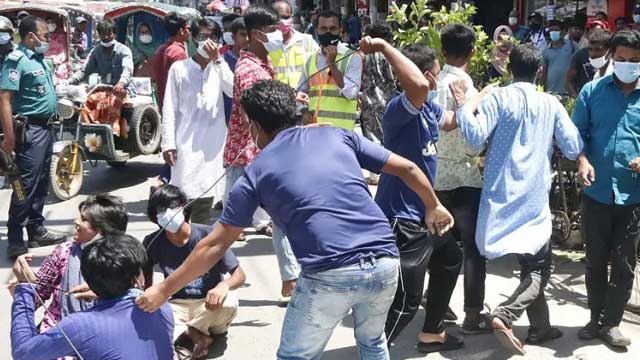 Leaders and activists of Bangladesh Chhatra League, the student wing of the ruling Awami League, on Wednesday allegedly carried out an attack on a symbolic hunger strike demanding reopening of the educational institutions that are closed since March 18, 2020 due to the Covid outbreak.

The demonstrating students alleged that a group of BCL leaders and activists carried out the sudden attack on them while they were holding a peaceful programme at Rajshahi’s zero point area.

They also claimed that three of the protesting students were injured in the attack.

Rajshahi city unit of BCL, however, denied the allegation.

Nadim Sinha, one of the organizers of the protest, said that they began a symbolic hunger strike at the city’s zero point area at about 11:00am and the programme was scheduled to end at about 6:00pm.

‘A group of thirty youths carried out a sudden attack and hurled abusive words in front of the law enforcing agency members,’ he alleged.

The attackers started beating up the man from whom the protesters rented the public announcement system and then swooped on the protesters, he added.

Istiak Ahemd, one of the injured students, told New Age that police did not cooperate them since the beginning of the strike.

‘Police did not allow us to hold a march programme and threatened the rickshaw puller who had been carrying the PA system,’ he alleged.

Mohabbat Hossain Milon, another demonstrator, alleged that the police personnel were mere witnesses when the BCL men attacked the protesters.

He also said that they wanted to bring out a procession and and hold a rally but the BCL men foiled their programmes.

Rajshshi city unit BCL president Mohammad Siam, however, told New Age that none of the BCL men attacked the students.

The demonstrating students at a press conference in Rajshahi Press Club in the afternoon demanded immediate arrest of the attackers and announced to hold a mass meeting at the city’s zero point on Thursday.

Nibaran Chandra Barman, officer-in-charge of Boalia Police Station told New Age that some people, who were disturbed by the activities of a group of students’ activities on busy road, removed the protesting students from the road.

The OC said that none lodged any complaint until evening in this connection.