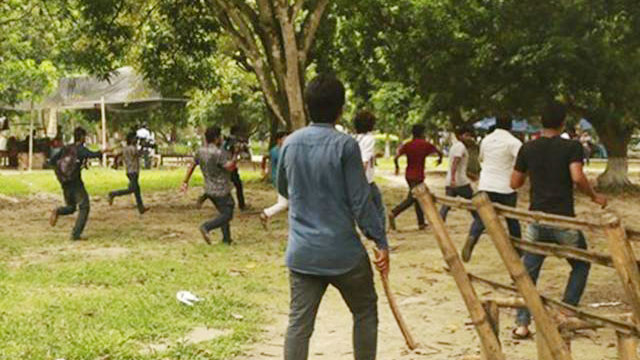 At least 10 to 15 students suffered minor injuries during the incident, our local correspondent reports from the spot.
The students gathered at different points including the premises of the Central Library for forming human chains around 9:50am when the BCL members allegedly attacked them.

Later, a group of 100 to 150 students again regrouped in front of the library around 11:15am in an attempt to form a human chain. But the BCL men swooped on the students with sticks to foil their attempt.

In April, students of public and private universities across the country took to the streets demanding reforms in the quota system.

In the wake of the protests, Prime Minister Sheikh Hasina, during a parliamentary session on April 11, declared the abolition of quotas.

After the government's failure to issue a gazette notification on the PM's announcement, the quota reform platform started an indefinite boycott of classes and examinations at all universities and colleges on May 14. They gave an ultimatum for the publication of the notification by May 13.

On May 21, quota reform demonstrators postponed their decision of boycotting examinations considering the month of Ramadan and at the prospect of “session jams” the strike might have caused.

However, on June 26, the PM suggested continuation of the existing freedom fighter quota in civil service.

At present, 56 percent of government jobs are reserved for candidates of various quotas, while the remaining 44 percent is drawn from applications on the merit list.