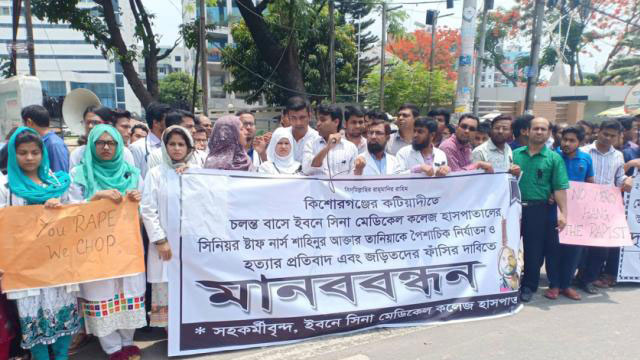 Hundreds of teachers, students and employees of IbneSina Hospital today protested the death of their colleague Shahinoor Akhter Tania, who was killed after gang-rape in Kishoreganj three days ago.

Forming a human chain in front of the hospital’s Kalyanpur branch, they demanded exemplary punishment of those who were involved with the rape and murder of Tania, a senior nurse at the hospital.

The protesters began their one-hour demonstration around 10:30am. They also blocked Mirpur Road but they withdrew it after a few minute considering sufferings of people.

On Monday night, Tania, who worked at IbneSina Hospital’s Kalyanpur branch in the capital, died in mysterious circumstances in a passenger bus on her way home in Kishoreganj’s Katiadi upazila.

Yesterday, Kishoreganj’s civil surgeon said that the autopsy of Tania found evidence that she was gang-raped and murdered.

Her nose, neck, legs and hands bore injury marks which suggestedthat she had a scuffle. The back of her head was fractured as well, said civil surgeon Md Habibur Rahman, quoting a three-member team of doctors who performed the autopsy yesterday.

“She suffered profuse bleeding in her head. It might be the cause of her death,” said Habibur.

Police arrested five people, including the bus driver Md Nuruzzaman, 39, and his helper Lalon Mia, 33, for their alleged involvement in the incident early Tuesday.