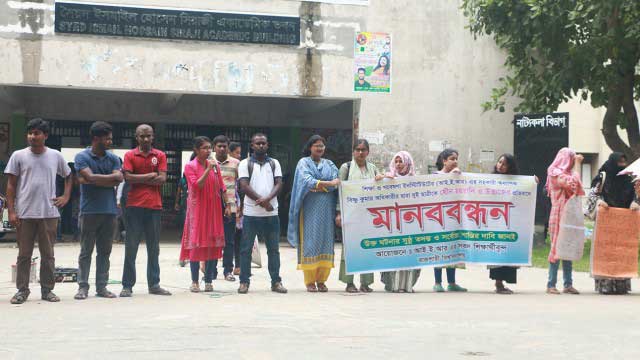 Around 100 students of Rajshahi University's Institute of Education and Research (IER) department formed a human chain today demanding punishment to the teacher who allegedly sexually harassed two students of the institution.

The student protesters gathered in front of the Syed Ismail Hossain Siraji Academic Building on the RU campus around 12:00pm.

Authorities of the IER department has already withdrawn the teacher from academic activities.

They also formed a three-member fact-finding committee to look into the allegations.

Convener of the committee Prof Abul Hasan Chowdhury, also director of the department, told the correspondent that they are yet to begin their work in this regard as they were busy with academic activities.

On Friday, the two female students filed separate general diaries (GD) with Motihar Police Station, seeking security, alleging that they were pressured to withdraw the complaints.