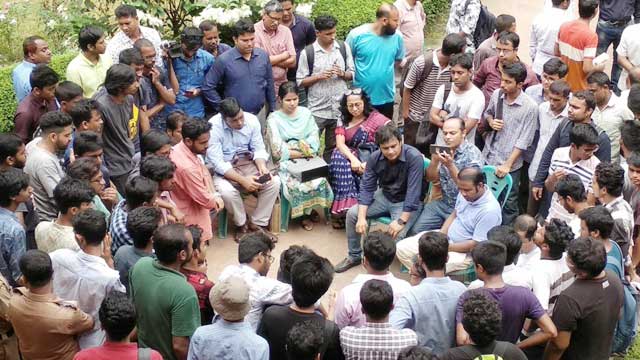 Students and teachers of Jahangirnagar University (JU) besieged the two administrative buildings for the second consecutive day today protesting “corruption of the authorities” and “unplanned” development works which would endanger the biodiversity of the campus.

The protesters started gathering on the campus and blocked entrances of the two buildings around 8:30 am.

Pro-vice chancellor (VC) (education) of JU Professor Nurul Alam and Pro VC (Admin) Professor Amir Hossain talked to the protesters on behalf of the administration around 9:30am.

Last reported by our university correspondent around 11:10am, the university Treasurer Professor Sheikh Md Manzurul Huq along with a proctorial body was holding a discussion with the demonstrators at the site of the protest.

The agitated students of JU have been demonstrating on the campus since August 23 demanding the relocation of three male students’ dormitories which the authorities planned to construct near Rabindranath Hall, and judicial probe into the allegations of corruption and irregularities took place before the approval of these mega projects.

Yesterday, they besieged the two administrative buildings. Ashikur Rahman, president of Jahangirnagar Cultural Alliance, said they would continue the blockade programme until Thursday.

Meanwhile, 17 out of 25 registered graduates of the university yesterday issued a statement urging the chancellor of the university, who is also the president of Bangladesh, and the education ministry to resolve the crisis.