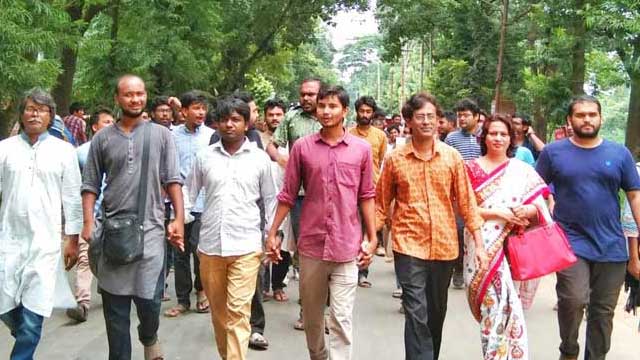 Jahangirnagar University (JU) authorities have given assurances to protestors demonstrating since last month, of taking action against the Chhatra League man who had allegedly assaulted a protestor at the campus.

According to witnesses, Nurul Islam Saimum, general secretary of Jahangirnagar Theatre and an organizer of the recent protests, was physically assaulted by Jahangirnagar Chhatra League organizational secretary Abhishek Mandal, around 10am on Saturday.

"Abhishek physically assaulted me when I went to have breakfast at a shop near Shahid Rafiq Jabbar Hall," Saimum, a student of the 44th batch of Environmental Science Department, said.

Abhishek, from the 41st batch of Government and Politics Department, said: "I was injured in the scuffle as well. The incident occurred because Saimum was acting insolently."

Authorities have also decided to expel him from his residential hall.

For the last three days, a group of students and teachers, under the banner "Jahangirnagar against Corruption" had been protesting in front of the administrative buildings, demonstrating against vice-chancellor’s alleged corruptions.

The protestors demanded for planned development and for the formation of a judicial probe committee to look into allegations of corruptions and irregularities, involving a project worth Tk1,445 crore.

The protestors also claimed the Vice-Chancellor, Prof Farzana Islam, was involved in the corruption.

Later on Thursday, after the vice-chancellor asked the demonstrators to sit for a discussion, they agreed to sit for it on Friday morning, on condition that their demands would be heard with integrity.

Around 11am Friday, the vice-chancellor went to the new administrative building, where the protestors had started to gather from earlier.

When she started her meeting with the protestors, they immediately demanded that action be taken against Abhishek.

They also demanded action against another Chhatra League man who had allegedly beaten up a first-year student of Al-Beruni Hall on August 27.

Unless their demands were met, they refused to participate in any further discussions, which prompted the authorities to take swift action.

General Secretary of the Jahangirnagar Chhatra Union Ariful Islam Anik – also a protestor – said: "We want to root out the practice of using muscle power in our campus. But the university authorities have been reluctant to do this, for a long time."

In the first phase of the project, the university administration called for tenders on May 1 this year, for the construction of six residential halls. The cost of constructing these halls was estimated to be around Tk400 crore.

However, there was an outrage on August 25, as news spread that the university VC Prof Farzana Islam was involved in corruption, and was accused of distributing around Tk2 crore among three factions of the Chhatra League’s unit if the university from the project fund.

Students and teachers of the university, which is renowned for its forestry, were also protesting the government-approved development project, for which 1,150 trees need to be cut.

Prof Rayhan said: "If the allegations prove to be true, the accused must be brought to justice and the project has to be adjusted to meet all the requirements of the master plan."