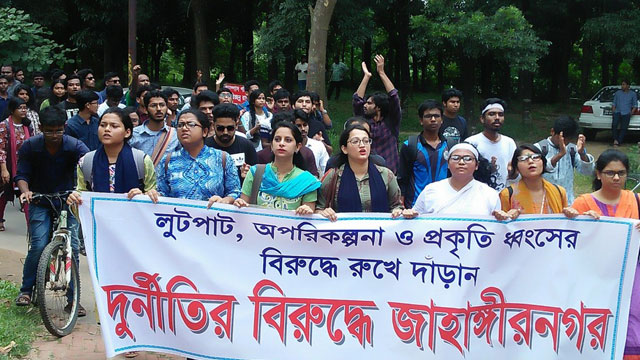 Around 50 teachers under the platform “Jahangirnagar Against Corruption” gathered on the campus around 11:30am and paraded the campus starting from Arts Faculty building and ended on the premises of old administrative building where they held a protest rally.

The speakers at the rally demanded relocating the three male students’ dormitories which are planned to be constructed near Rabindranath Hall, and a judicial enquiry into corruption and tender snatching.

Prof Taslima Sultana, chairperson of Anthropology department, said, “The vice-chancellor (VC) is supposed to be the guardian of a university. When unjust allegations are published in the newspapers involving her name, we cannot accept it at all.”

Over a hundred students brought out a procession that started from the Social Science faculty and ended at the administrative building where teachers were already staging rally this afternoon.

The students also expressed solidarity with the teachers programme, reports our JU correspondent.

Before starting the procession, they staged a street drama 'Akti Non-Fiction" by Jahangirnagar Threatre around 12:30pm.

Agitated students of JU have been demonstrating on campus since August 23 demanding the relocation of three male students’ dormitories which the authorities planned to construct near Rabindranath Hall, and a judicial probe into the allegations of corruption.