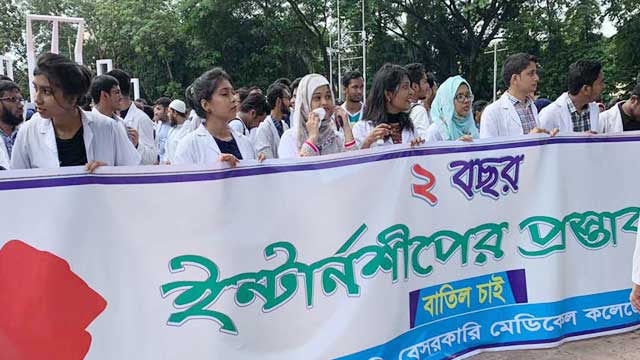 Students of Dhaka’s public and private medical colleges have staged protested against Health Ministry’s proposal of increasing internship program from one year to two years.

Around 500 students gathered in front of the Central Shaheed Minar on Monday, demanding that the proposal be scrapped.

On August 27, the Health Ministry gave the proposal to the authorities concerned of issuing curriculum to consider the matter.

Later, the ministry withdrew the proposal temporarily after students expressed dissatisfaction about increasing the internship period and sending them to upazilas for the second year.

Shaimul, a fifth year student of Dhaka Medical College (DMC), said: “Government withdrew the proposal temporarily, but we want a permanent solution for this.

"We do not want to complete internship by going to different upazilas for one additional year, as there is no security.”

Fariha Chowdhury, another fifth year student of DMC, said: “In root level, there is a lack of infrastructural development. Even the first class gazetted doctors are not safe there [in upazilas]. How can we sustain (there)?

"Moreover, the two year internship program will hamper our career.”

Md Nuruzzman, a fifth year student of Sir Salimullah Medical College, said: “Internship is the time to learn from teachers. If we are appointed in upazilas, we will hardly find professors there from whom we can learn.”