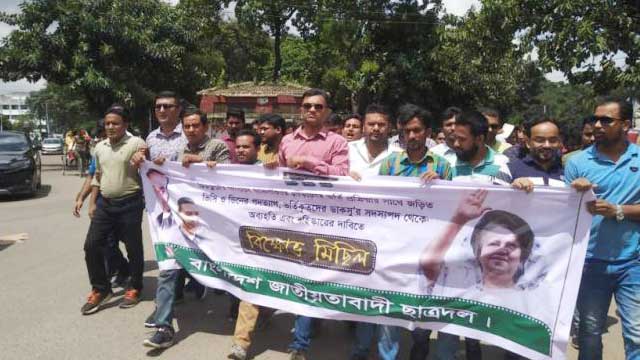 Various student bodies of Dhaka University on Wednesday brought out demonstrations in the campus demanding resignation of the vice chancellor of university and business faculty dean for 'illegally enrolling' BCL leaders at a masters’ programme to facilitate their participation in DUCSU election.

They alleged that DU authorities are working as an accomplice to wrongdoings of BCL leaders and giving them undue advantage.

A daily report on Sunday revealed that 34 former and current leaders of Bangladesh Chhatra League (BCL) got admission into the Masters of Tax Management Programme under the Banking and Insurance Department without sitting for any admission test which breached university’s enrollment policy.

The admissions were made to maintain the BCL leaders’ studentship after the DUCSU (Dhaka University Central Students’ Union) elections had been announced on 11 February.

Dhaka University’s business faculty dean Shibli Rubayat Ul Islam, however, at a media conference on Tuesday refuted the report claiming that students who completed graduation and post-graduation from the university can be enrolled in the evening programmes without any exam.

The dean also said that those students only have to sit for viva voce and there were no admission circular needed for such admission as per a decision made by the chairman’s committee.

Deans of different faculties and professors of business faculty, however, said that they are not aware of any such decision.

The student body’s convenor Hasan Al Mamun alleged that the current DU authorities do not take any action against any wrongdoings of ruling party student wing BCL.

“This administration doesn’t represent the students of the university rather they represent BCL in every way possible,” he alleged.

Joint convener of the organisation Faruk Hasan demanded fresh by-polls in the posts in which BCL leaders admitted through illegal process were elected.

He also demanded resignation of the VC and business faculty dean.

The procession, led by JCD’s DU president Al Mehedi Talukder, started at Raju Sculpture of TSC area and finished at Shib Bari area of the campus.

Leaders of some left student organisations and a section of general students also demanded resignation of the DUCSU leaders’ in question at a press briefing at TSC.

DU unit general secretary of Bangladesh Chattra Union, Ragib Naim in his written speech demanded expulsion of 8 leaders of DUCSU who got admitted without sitting for any admission test.

He also demanded expulsion of VP, GS and AGS of Ruqayyah Hall over their alleged involvement in recruitment business.

A group of resident students of the Hall on 4 September brought out allegation that the leaders with the help of the hall provost embezzled Tk 2.1 million through irregularities in recruiting office assistants, gardeners and security guards.