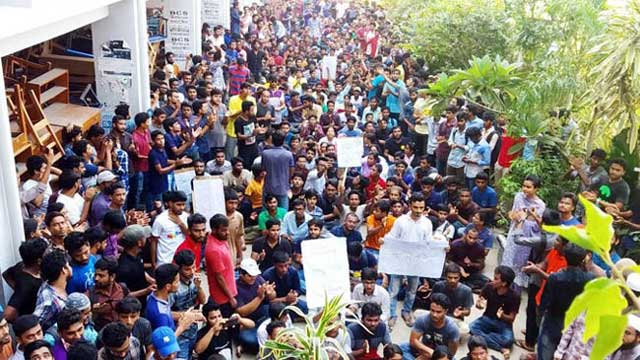 The authorities of Bangabandhu Sheikh Mujibur Rahman Science and Technology University (BSMRSTU), in a sudden announcement, declared a 15-day holiday starting from tomorrow on the occasion of Durga Puja amid ongoing protests demanding resignation of the vice chancellor.

The BSMRSTU authorities also issued a notice asking resident students to vacate all six dormitories by 10:00am today.

The students however refused to vacate the halls, and said they cannot leave the campus right now due to the ongoing protest against VC Prof Khondoker Nasiruddin for his alleged involvement in corruption and irregularities.

Criticising the move, Shums Jabin, a third-year student of law department, said the decision was made in an attempt to thwart their protest and they vowed to continue their demonstration until the VC steps down from his post.

The university was supposed to go on a five-day vacation on the occasion of puja from October 4, the students claimed.

Contacted, VC Prof Khondoker Nasiruddin told that the measure was taken due to an “emergency situation”, to avert any unwanted incident and to ensure fair atmosphere for education.

Huge number of law enforcers have been deployed outside the campus.

A section of the protesters is continuing their “fast until death” which they started on September 19 at the university’s administrative building to press home their demand.

The protesters brought 20 allegations against the VC including sexual harassment, nepotism in recruiting teachers and other employees, and corruption in development projects like Shaheed Minar and Bangabandhu’s mural.

The demonstrators alleged that the university authorities suspended students and served show-cause notice to those teachers whose speeches or statements go against them.

Fatema Tuz Zinia, a second-year student of law department and a campus reporter of The Daily Sun, was a victim of suspension for a Facebook post.