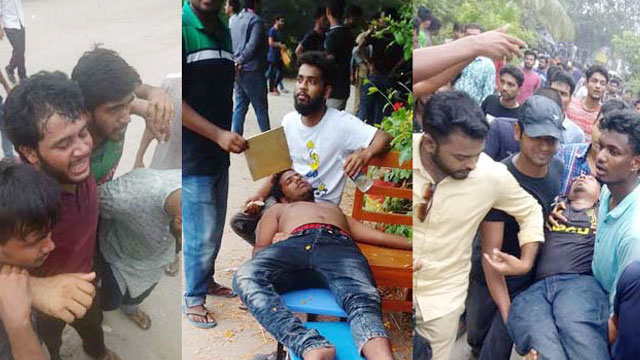 At least 50 students, including three journalists, were injured in an attack on protesters at Bangabandhu Sheikh Mujibur Rahman Science and Technology University in Gopalganj on Saturday hours after the authorities announced the university’s closure and ordered vacating halls of residence.

Students alleged that a group of villagers backed by the university vice-chancellor Khondoker Md Nasiruddin carried out the attack on protesters at places including Balur Math, Sobhan Sarak, Gobra Madrassah and Nilamath areas near the campus as the students continued their protest ignoring order to vacate halls by 10:00am on the day.

Several hundreds students were staying in front of the university’s administration building to press home their demand of resignation of its vice-chancellor till filing the report at 7:30pm.

Though the students immediately failed to trace the attackers, later said that they suspected that a student of the university’s management department and a local leader of Juba League along with a group of outsiders conducted the attack on the students.

On the other side, Bangladesh Chhatra League of Gopalganj district unit protested the attack on general students.

Beside, students of Dhaka University, Jahangirnagar University and Rajshahi University brought out processions protesting the attack on BSMRSTU students and shut the campus and demand of removal of the vice-chancellor for his alleged involvement in corruption, autocratic behaviour, sexual harassment, recruitment forgery and misuse of power.

The notice said that the members of the university’s regent board gave their verbal opinion to close the university to ensure peace on the campus, resolve disagreements between different groups and to avoid any unexpected incident till October 3.

It says that 12 days of vacation would be added with the scheduled vacation of forthcoming Durga Puja.

According to the academic calendar, the vacation for puja scheduled to be started from October 6 and end on October 8 while October 4 and 5 is weekly holidays.

The agitating students announced to continue their demonstration until their demand were met and they decided to stay at the halls defying the authorities’ notice.

Following the students’ decision, the university authorities cut off the power and water supply lines of the halls and stopped the transport services so that student, living outside the campus, could not participate in the demonstrations on the campus.

Imitate after the attack, the injured could not be taken to hospitals as the transport services were halted and latter at least 30 injured students were admitted at Gopalganj General Hospital where the condition of four students was stated to be critical.

The demonstrating students alleged the vice-chancellor was involved in various misdeeds including recruitment forgery, misappropriation of money and sexual harassment on female students.

The university assistant proctor, Humayun Kabir, resigned from his post following the ongoing incidents, while a quarter of teachers extended their support to the demonstrators.

In a letter, Gopalganj district unit Chhatra League demand immediate punishment of the attackers and extend their support to all logical demands of the students.

The students’ demonstration against Nasiruddin began on Wednesday night after four student leaders talked live on social media about the existing problems and corruption prevailing at the university.

About the BSMRSTU situation, deputy minister for education Mohibul Hasan Chowdhury told New Age that the ministry asked Gopalganj deputy commissioner to inform the ministry about the facts of the movement by next working day.

He said that the ministry would take necessary steps after holding a meeting on it.

He said that its need to find behind reason that why the students stayed in campus even the university was closed.

BSMRSTU vice-chancellor Khondoker Md Nasiruddin on Saturday told reporters that he suspected that anti-government groups were involved with the student unrest.

Students of different universities also brought out rallies at the call of the Bangladesh General Students' Rights Protection Council while Bangladesh Chhatra Federation and Samajtantrik Chhatra Front brought out processions in Dhaka University.