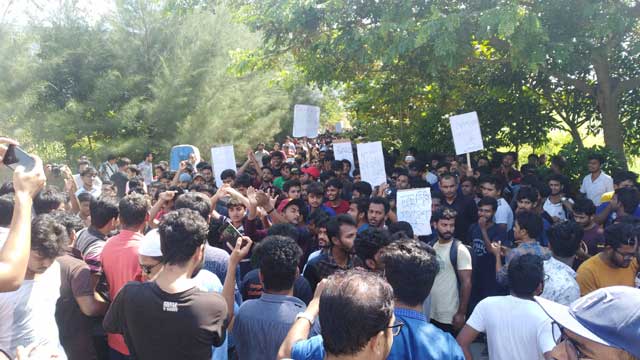 The peaceful demonstrations by the students of Bangabandhu Sheikh Mujibur Rahman Science and Technology University (BSMRSTU) continued for the sixth consecutive day on Tuesday, demanding resignation of the Vice-Chancellor (VC).

In the morning, the students thronged the campus and staged demonstrations seeking removal of VC Prof Khondoker Nasiruddin.

BSMRSTU authorities on Saturday ordered students to vacate the residential halls and extended the Durga Puja vacation from September 22 till October 3.

Defying that order, students of the university kept their demand alive till Tuesday, even they were attacked in the campus by outsiders allegedly men of VC on Sunday.

The UNB correspondent on Tuesday saw the agitating students took over the control of the main gate of the university to stop any outsiders to enter their campus.

A number of police personnel were also seen at the entrance of the university.

Students alleged that there was no freedom of speech on the campus and that no-one could speak against irregularities of the VC.

BSMRSTU’s decision to suspended Fatema-tuz-Zinia, also the university correspondent of the Daily Sun, on September 10 for her ‘objectionable’ writings on Facebook triggered a student protest. It forced the university authorities to revoke the suspension order on September 18.