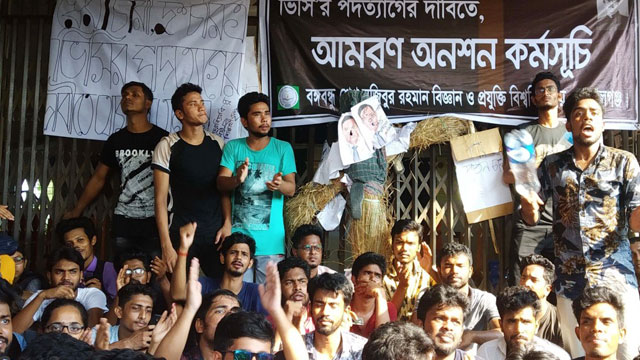 The probe committee, formed by the University Grants Commission (UGC) to investigate the alleged misdeeds of Bangabandhu Sheikh Mujibur Rahman Science and Technology University vice-chancellor, has recommended he be removed from his post.

A letter, signed by UGC Chairman Prof Dr Kazi Shahidullah, was sent to the Education Ministry in this regard, confirmed UGC Member Prof Dil Afroze Begum.

She said the three-member investigation committee found evidences of irregularities and corruption on the part of BSMRSTU VC Prof Dr Khondoker Md Nasiruddin.

The investigation committee, commissioned by the university authority, on September 27 submitted their investigation report on the attack on student protestors.

Students of BSMRSTU at Gopalganj have been staging non-stop demonstration for 11 days demanding the VC's resignation.

On Sunday, they also continued their sit-in program on the university campus. Meanwhile, they sought the prime minister's intervention to solve the crisis.

The students started their protests when the BSMRSTU authorities issued an order to suspend second-year law student Fatema-tuz-Zinia earlier this month, for her supposedly objectionable comments about BSMRSTU in Facebook on September 10.

However, the university lifted the suspension order on September 18, after the news went viral on social media, and sparked severe criticism about the university.

On September 21, at least 20 students of BSMRSTU in Gopalganj were injured during attacks by the vice-chancellor’s supporters.

Ignited by the incident, the students strengthened their protest against the vice-chancellor, and demanded his resignation.