Students to carry on movement 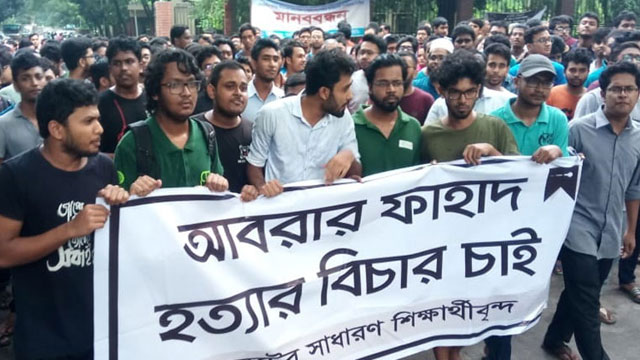 The Bangladesh University of Engineering and Technology on Friday banned all sorts of political organisation and their activities on its campus and suspended the 19 students accused of torturing to death its student Abrar Fahad.

The university also banned all forms of torture on students in the name of ‘ragging’, accepting most of the 10-point charter of demands placed by the agitating students following the murder of Abrar.

BUET vice-chancellor Saiful Islam announced the decisions at a meeting with the students of the university who had been on demonstration seeking justice for the killing of their fellow student for five days.

‘I, based on the authority vested in me, am announcing ban on all political organisaitons and their activities in the university,’ announced Professor Saiful at the meeting in the BUET auditorium.

‘The suspension of the 19 students who have been made accused in the first information report on the murder of Abrar will be effective from now on and the decision on rustication of all the students involved in the murder would be made after completion of the investigation,’ he added.

Professor Saiful said that politics by the university’s teachers had also been banned in the university forthwith and urged those concerned to dissolve the committees of all political organisations.

The VC also declared that justice would be ensured after investigating the previous incidents of torture.

He announced that an online platform would be created where anyone, hiding their identities from the authorities, could disclose any incident of torture so that prompt measures could be taken.

He said that the university would provide compensation to the family of Abrar and bear the expenses for the case.

VC Saiful, who drew ire of the students after he delayed to appear in public following Abrar’s murder, apologised to the students for his inaction.

The VC, who was urged to step down by the university’s teachers association on Thursday as he ‘lost his moral authority’ to stay in the position due to his persistent indifference to and failure in ensuring safety of the students, also said that he would write to the government for an early trial of the Abrar murder case.

Regarding this year’s planned admission tests, the BUET VC said that they would be held as per the schedule on October 14 but other examinations would be rescheduled.

But the students rejected the decision, saying that taking the admission tests and the term final examinations should also be postponed until all the demands were met.

During the meeting, Prof Pran Kanai Saha, chairman of the BUET examination committee, said that they had moral support for demands made by the students and requested them to withdraw the agitation for the sake of the admission tests and term final examinations.

The teachers left the meeting room as the students rejected their request.

Coming out of the meeting, students said, ‘We will continue our protest programme until the demands are met.’

‘The admission tests and term final examinations of all the departments will remain postponed during the movement,’ the students said.

At about 10:45pm, one of the students of electrical and electronics engineering briefed the media on behalf of the protesting students.

He said that they would consider if the admission tests could be held on on October 14 if their five-demands were met.

The five demands include written assurance of suspension of studentship of the suspects in Abrar murder and expulsion accused who would be named in the charge sheet, written assurance of bearing the cost of conducting Abrar murder case and adequate compensation for Abrar’s family, initiation of an online platform for submitting allegations of the students and ousting the members of political parties from rooms of all the halls and sealing the rooms used as political student organisation’s office.

He said that their protests for 10-point demands would continue until their demands were met.

Abrar, a second-year student of BUET’s electrical and electronic engineering department, was tortured to death by a group of Bangladesh Chhatra League leaders of Sher-e-Bangla hall early hours of Monday reportedly for his critical views on social media over the recently signed deals between Bangladesh and India.

Highly charged protests continued at the BUET and on other campuses across the country following the gruesome murder.

Police so far arrested 17 accused, most of them BUET BCL leaders.

The university’s students were agitating for the fifth consecutive day on the campus on Friday to press for their demands.

Their 10-point demands asked for rustication of the alleged killers of Abrar from the university, capital punishment for them, compensation to Abrar’s family, bearing the family expenses for running the case, speedy trial of the case, making the charge-sheet public, rustication from the university of all those involved in torturing students in the past and ban on organisation-based student politics at the BUET.

The students on Thursday issued an ultimatum to the VC asking him to appear before the students and clarify his stance over the incident or else, they said, they would lock down all the buildings on the campus.

On Friday, they declined a proposal from the VC that he would sit in a closed-door meeting with student representatives and said that the VC must answer to their questions in front of all the students and in presence of the media by the afternoon.

Later, the meeting began about 5:00pm in the BUET central auditorium which protesting students filled. Senior teachers, administrative officials and the student welfare director were present.

Earlier on the day, the students started a sit-in at the base of BUET Shaheed Minar in the morning and continued to chant slogans demanding justice for Abrar and denouncing the university administration.

They staged a street-drama in the afternoon depicting barbaric tortures they were subjected to by BCL activists in their dorms.

They also carried posters, banners and festoons with different slogans with regard to their demands.

After the meeting between the VC and the students, BUET officials started a search for the outsiders staying at the dorms and the students who occupied rooms for running political activities.

Home minister Asaduzzaman Khan said on the day that the BUET authorities should have been more careful.

‘Such incident [Abrar murder] might not have happened if they were more careful,’ he said while talking to reporters at a function in capital’s Tejgaon area.

He promised that a flawless charge-sheet would be pressed soon on the murder.