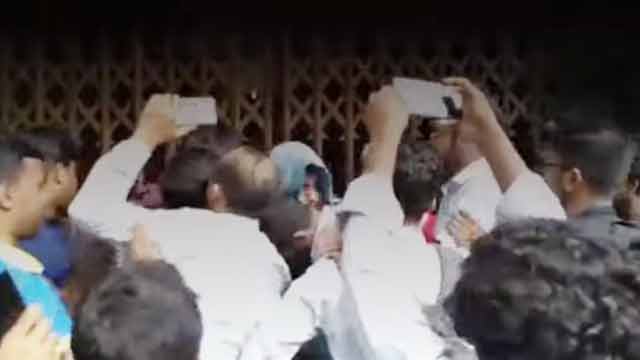 Assistant Proctor of Jahangirnagar University (JU) allegedly assaulted a student leader who along with other students was protesting against the alleged corruption by the authorities.

Then, he gathered a bunch of students and attacked some of the students. He grabbed Nazir in an attempt to remove him from in front of the faculty gate, Nazir claimed.

A video obtained by The Daily Star shows that the assistant proctor dragged Nazir to the ground and took him away from the protesters and said, “Let’s sit separately”.

Contacted, Mohibur Rouf denied the allegation of assaulting Nazib and said, “Rather I had suffered injuries”.

“I did not attack them. I did not grab the president of student union by his collar, rather I held him by the shoulders and moved him from the spot,” Shaibal said.

“During this time, someone kicked me on my stomach eight to ten times,” he added.

He further said he suffered injuries near his urethra (urinary passage) and is now being treated at Enam Medical College and Hospital.

Soon after, protesting students broke off into separate groups and started chanting slogans against Professor Shaibal and the incident.

Meanwhile Professor Rayhan Rhyne of Philosophy department, a spokesman of 'Jahangirnagar Against Corruption, condemned the attack and said it is extremely “tragic” that a teacher could do this to a protesting student.